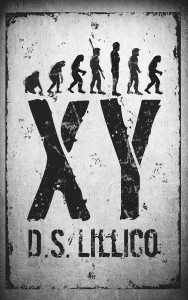 XY, an interesting title that I gather refers to the distinctive chromosomes found in each gender, is quite the novel.

The premise is some kind of mutagenic agent has been released in the UK and quite possibly, across the globe. Males appear to be affected by it while females remain unchanged. The mutations that affect the males is quite drastic. Some are changed into quasi-animals with heavy fur, fangs, claws, what you’d expect if you were face to face with a grizzly bear, while others are changed in different ways, barnacles, stone like skin, etc.

XY tells the story of Elsie, a little girl who has lived inside an armored fortress all her young life. When her mother dies, either from natural causes or from massive depression that she will never live in an unchanged world, little Elsie makes a decision to leave the fortress. The outside, for a six year old, is full of nightmares. Her mother had told her that women in the wasteland were either prostitutes, sent to breeding farms, or given to the Doctors to be vivisected.

Those ‘people’ outside the fortress live in dwellings that are named after the location of that enclave. For instance, if a group of surviving mutants live in the remains of a large city, they might refer to it as the Iron Dwelling given the material that the city was once made of. That might also apply to those that live in an old castle, by referring to their residence as the Stone Dwelling.

This rich, post apocalyptic wasteland is exquisitely described by Lillico much like Tolkien described his middle earth. The range of characters, their unique mutations, and how they’ve adapted to the their changed environment, is pure pleasure to read.

Whether by accident or design, Lillico has created a mystique known as ‘the Doctors.’ This reminded me of Truman’s Scout series from years ago. These Doctors travel the wasteland in specific garb that makes them stand out like the druids of ancient times. The Doctors are the primary life takers and healers in the XY world. One is Elsie’s father whom the fortress that was her home is named after, Cuthbert. When word reaches Iron Dwelling that the Cuthbert Fortress has lost power, the race is on as to who will reach it first to scavenge what treasures might remain inside.

I can’t help but refer back to Tolkien again as the plot evolves. Two long time friends from Iron Dwelling make a journey across the wasteland to save little Elsie much like the hobbits in their quest for the ring.

XY ends with a hint that there is more to come. I for one look forward to the next installment of this storyline. If you’re looking for a intriguing post apocalyptic novel, then look no further than XY by D.S. Lillico.