Would you Rather – Film Review 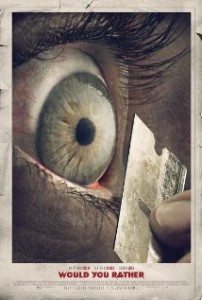 When reviewing dark celluloid I’m always trying to find those accomplished gems that may have slipped through the cracks of the collective consciousness: films with small budgets but come equipped with a generous helping of sophistication that lifts it above current contemporaries. Without any long winded preamble, Would You Rather hits this sweet spot in almost every regard. Reminiscent, perhaps, of a domestic Hell House (with a smattering of torture porn), the story itself falls more into line with dark fiction. Though we may feel somewhat familiar with the plot, the allure of a simple ‘deal with the devil’ is no less tangible for that.

After moving back home to help leukemia stricken Brother Raleigh, Iris finds herself in a world of mounting medical bills and debt. Enter a philanthropic snake-oil salesman aristocrat (Shepard Lambrick), who offers her an eccentric deal: participate in a one-night-only game under the guise of a dinner party. Though Iris remains ignorant of the game’s strictures, the offer itself is simply too good to refuse. For the winner, there will be untold wealth at the hands of the Lambrick Foundation. For the loser … death.

And so the party begins. Joining Iris at the table on this night is a motley crew of flawed individuals, each with their own desperate need for being present. There’s Conway (John Heard), a recovering alcoholic who already has conspiracy theories regarding the Lambrick Foundation. There’s Linda, the elderly wheelchair bound paraplegic. Travis, an Iraq war veteran; Amy, the mute Goth. And rounding out the festivities are both Cal and Lucas. Finally seated – and ignorant of the ultimate rules – Shepard Lambrick joins the party as master of ceremonies. Dinner is served, and it isn’t long before each character’s fearful idiosyncrasies are revealed: for Iris, it’s being a vegetarian. For Conway, the booze. After noticing their individual predicaments, Shepard offers them cash in exchange for a glimpse of the beast. That is, partake of their abhorred behaviours. Of course, this is where we are reminded of Would You Rather’s foundations – short stories like Clive Barker’s Dread and the entire SAW franchise. Except in this case there are no epiphanies waiting for the contestants at the end … only one winner who will earn the promised prize money.

With the first part of the game concluded, the real round begins – which is a macabre version of Would You Rather. Overseeing the party game is Bevans, a suited-up Butler from the old school who dispenses electric shocks, whippings, and near-drownings in case the contestants become unruly or do not follow through with their end of the bargain. Perhaps this is the philosophical element of the movie, where human choices are explored under duress: would you rather stab the contestant next to you or suffer the same fate twofold? Would you rather endure a whipping or extol your own? And always in the background is the carrot at the end of the stick: your personal malady cured. Or, as in Iris’s case, medical treatment for a brother if she can just make through to the next round.

Taken as a whole Would You Rather falls into an interesting paradigm: on one hand it could have been so much better … on the other it could have been so much worse. What we have instead is a film that slides beautifully into the middle. Thankfully, not all the action takes place at our tortuous party, with a single plot strand involving Iris’s doctor (as a would-be savoir), working as a side-dish to the main action. Though it’s a small supporting part, there are just enough layers here to keep a viewer happily moving from each scene to the next. If there was one glaring gripe, however, it’s an almost total lack of character development with Iris’s fellow contestants. While some are quiet, all are equally mysterious and do not give up their secrets easily. To remedy this, perchance it would be conceivable to include a flashback scene to give these individuals one more dimension atop the two already on show.

Though horror here is abundant, Would You Rather still finds its niche far more in the realm of psychological thriller. With a satisfying conclusion to the darkly humorous game – and an inevitable twist to round off proceedings – this is endurance at its most disturbing.