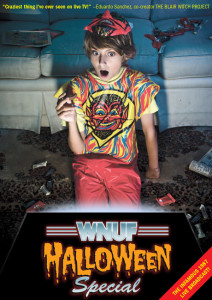 This is a very indie movie that came out last year, one that slipped under the radar of many horror fans, and I think that’s a damn shame, so that’s why I’m reviewing it here. If you’ve never heard of it, well you’re not alone as it even slipped passed me, and it’s sort of my job to stay on top of things like this. So grab your overstuffed bag of trick or treat goodies, but make sure your parents check the candy before you start eating it. After all, it’s always better to be safe than sorry.

This film is a long lost newscast from 1987 where a reporter and some experts go into a local haunted house one Halloween night for a typical fluff news piece. As you might expect in a horror movie, whatever they find there is anything but fluffy. Presented in mockumentary fashion, this little movie excels at warping reality and creating something that just might be possible. So much so, that when I watched this DVD, I told the friends I was showing it to that it was an actual real life event caught on tape and they bought that story almost all the way through the film. That’s something that other, better known and bigger budgeted found footage films (which this movie is the very essence of) hardy ever get right.

Sadly, if this movie has one weakness, it’s the ending, that while not horrible, is not as good as anything that came before it. It is a bit too wink-wink-nudge-nudge and some of the performances are far too camp at the climax. That said, what comes before it is pure awesome if you’re a nostalgic child of the 80s, as I am.

Filed with the kind of cheesy local commercials I grew up watching, and way-too-earnest newscasters trying far too hard to have fun with the Halloween spirit, this movie captures the 80s like few modern movies have. That’s really saying something, as the 80s is a hot commodity right now, especially in the horror world. It seems like every year at least three or four new films come out promising to be throwbacks to that golden time of horror flicks, and yet to a one, they always fall way short. Well WNUF nails that decade perfectly in both content and style, and a good portion of that credit goes to the wonderful commercials that populate this film. And those commercials are why for this review, when it comes to director I list “Chris LaMartina & others.” While Chris does the majority of the work here, many of the commercials are guest directed, and even with that many cooks in the kitchen, the end result is still tasty and never once comes off as a jumbled mess like many multi-director anthologies do.

The WNUF Halloween Special is a slice of throwback fun that delivers on its promise of nostalgia. As a straight up horror movie, it doesn’t quite work, as it is never once scary, suspenseful, shocking, or bloody, although it does have minor elements of all that in it. What sells this flick is it’s wonderful 80s look and feel, something it does better than pretty much any other modern “hey, don’t you miss the 1980s?” movie. If that sounds like your thing, then be sure to give this special little Special a watch. Consider it highly recommended.