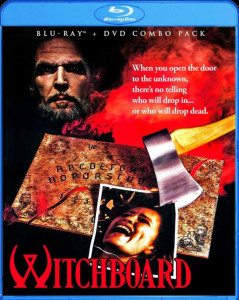 Talk about the perfect idea for a horror movie. Who hasn’t heard of, seen, or even played with an Ouija board? Remember that all the troubles in one of the best horror movies ever made, The Exorcist, begins with little Regan talking to Mr. Howdy on one of those spirit boards. Hell, even my mom has warned me about playing with Ouija boards on multiple occasions. No, really. So in 1986 it was about time someone made a movie about the evils of Ouija board abuse. That movie was Witchboard, and not only did it have a very good starting point, it was thankfully a well-made and truly scary movie. If you’ve seen it, then you know that already, and you will no doubt get this new Blu-ray. However if you’ve never seen Witchboard, then come along with me and let me tell you about one of my favorite fright flicks from the 1980s.

So you have the stunningly beautiful Tawny Kitaen (before she starting crawling all over Corvettes for 80s hair band Whitesnake) as Linda, her current boyfriend, Jim, and her ex-boyfriend, who is also Jim’s ex-best friend, Brandon. Into this weird love triangle comes a night of partying and Ouija board use.  After some spooky vandalism, Linda becomes at first intrigued by the little boy ghost, David, that is connected to the Ouija board. Her curiosity soon become a dangerous obsession, despite the mounting evidence that “David” may be more than he seems. What evidence? Oh you know, friends being murdered, having knives fly at you, and being flung all over the house by some invisible attacker. It is soon up to Jim and Brandon to patch up their differences and get to the bottom of the mystery if they are to save Linda from a nightmarish fate.

Witchboard is very much unlike the next movie Kevin Tenney would direct; the loud, gory, and bombastic Night of the Demons. Witchboard is more concerned with building tension and dread than shocks and jump scares, although it has a few of those, too. It is a much more serious film, but that shouldn’t be mistaken for slow or boring. It is more interested in scaring you than entertaining you, and I like that when it’s pulled off well, as it is here. The direction is solid and all three of the main actors deliver good performances, although my favorite character is the colorful psychic, Zarabeth, played to wisecracking, gum-chewing perfection by Kathleen Wilhoite.

As for the extras on this new Blu-ray/DVD combo pack from Scream Factory, first and foremost this movie looks amazing in HD. If that wasn’t special enough, there are also a lot of goodies found here. There is one brand new commentary track with writer/director Kevin Tenney and actors Stephen Nichols, Kathleen Wilhoite, and James Quinn. There is another commentary with Kevin Tenny, Executive producer Walter Josten, and producer Gerald Geoffray. There is a making of documentary on here called “Progressive Entrapment” that runs 46 minutes. There is a “vintage” making of segment here that’s 7 minutes of behind the scenes video shot on the set. There is also over 20 minutes of interviews with the cast, combined with more behind the scenes stuff, that was also shot back in the 1980s. Not enough classic video insider stuff for you? Well there’s another 20 minute chunk with actors Todd Allen and Stephen Nichols. There’s 20 more minutes with the crew that worked so hard to put the sets together for the film. And then 20 more minutes (hmm, I see a theme here) of “life on a movie set” footage. There is also 21 minutes of interviews and behind the scenes bits with even more crew. As if all that wasn’t enough, there are the usual trailers, a collection of outtakes, a behind the scenes photo gallery, and a promo gallery. That is a whole bunch of love for this film, and I for one loved it all.

Witchboard is a solid, well-made, effective little fright film. It’s got plenty of style and loads of that 80s charm I just can’t get enough of. Because of that, I highly recommend this new Blu-ray to any horror fan. For those so interested, this comes out February 4th.