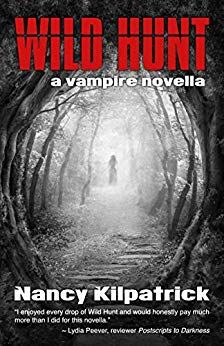 Wild Hunt is the story of Lorelei, a young woman with impaired sight who is also clairvoyant. One day, a mysterious man comes for a reading. He turns out to be a centuries-old vampire, Vlad. Together, they embark on an unconventional road trip.

A “Wild Hunt” is a term from folklore where “supernatural hunters carry out vengeful acts.” The Wild Hunt, in this case, is Vlad searching for his remaining family members, who can trace their lineage back to Vlad Tepes, whom some of us fondly refer to as “The Impaler” or Vlad Dracula. The idea of speeding along the Autobahn as the passenger of a vampire is oddly romantic, especially when the final destination is Transylvania. Both characters have strong ties to their ancestors, with Lorelei being especially influenced by her grandmother. Because of this tie to ancestry, along with Vlad being older than I can count, I had to remind myself that the setting is contemporary, as it truly had an old-world charm.

Nancy Kilpatrick gives readers a choice between two endings, depending on their feelings regarding the relationship between Vlad and Lorelei. This is a relationship charged with sexual energy. This is no Twilight, folks. Lorelei may be protective of her virtue, but she is fully in charge of her passion.

Kilpatrick knows her vampire lore and her “faux” vampire lore (serial killers who were either convinced they were vampires, or who acted in a vampiric manner). Wild Hunt reads like a road map of recent vampire activity—as a fan of both vampires and serial killers, I found this very intriguing.