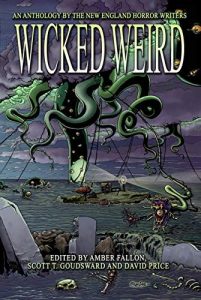 New England Horror Writers know weird. Their anthologies always include an eclectic collection that ranges from gothic to bizarre. Wicked Weird, as the name denotes, swings more toward the bizarro end of the horror spectrum, but it still manages to provide a diverse catalogue of stories.

I would like to begin by giving props to the editing team for having the opening act be “Those Beneath, Devour” by Victoria Dalpe. The story begins in medias ras which is a smart way to kick off the collection in terms of instant tension. In fact, the eye-catching cover by Ogmios was also a perfect “hook” to the anthology.

I have read and reviewed each of the NEWH anthologies, and they are always a fine read. While Wicked Weird is not my favorite of the collections, it has some offerings that are not to be overlooked:

“Salt Cave” by Morgan Sylvia: A spelunking expedition that is told with an ethereal and captivating style. Sylvia writes, “I don’t know what they are or what to call them. I only know that they are waiting for me. They send me dreams and nightmares. Spiders carry their thoughts to me, no matter where I am. They sing of death and dying stars…” This story is otherworldly while being completely of this earth.

“The Sweetness and the Psychic” by LL Soares: The search for a ransomed boy leads to a house with mysterious messages. If you taste a sweetness while near the house, you must leave immediately—it was this edict that piqued my interest and kept the pages turning.

“Pet Shop of the Gods” by Rob Smales: The biology teacher who doubles as a guidance counselor requires ostracized Mark to pick out the class pet. A mysterious pet shop helps to put an end to Mark’s days of being bullied but the results are far more catastrophic than the teacher had planned.

“The Mass of the Greatest Sin” by Trisha J. Wooldridge: This was probably my favorite story as, while a bizarre piece of fiction, it was entirely relatable. It begins with a bad T experience (are there any other types of T experiences?) and goes on to categorize all of the ways that weight and self-image can cause daily mini-deaths through embarrassment and shame. Wooldridge pulls no punches. She describes the doctor’s visit for the obese character: “She trudged to the scale, gallows-bound. The nurse creaked out a hrm like a dropped noose.” It’s impossible to feel anything but sympathy and concern for the main character and that drives the plot of the story.

“Better Late, Than Never” by Wicker Stone: Jack “Skinny Bop” Harris goes to hook up with Riley, whom he met on a Tinder-like app.  The road is a beast and drivers’ tires pay the price. The story has a twilight-zone type resolution and the characters are interesting.

“Starry Night” by Jason Parent: I loves me some creature features and this story is definitely that.  Old Bessie, the dog, enters the forest and comes back different. Dark forests are known for their secrets and this story tells of one generations deep.

“Sanguisuga” by Kali Moulton: Moulton had me at the first line: “Everyone around me is an asshole.” Robert, a.k.a. “Slobert” meets Stari in a bar. She is full of “home world traditions” and helps Slobert become the man he always wanted to be. As expected, there is a twist, and it is very satisfying.

“It’s a Long Walk to the Ocean” by K H Vaughan. Two brothers on fire (literally) set out to seek answers to their predicament. What I admire most in this story is that it focuses on the brothers’ relationship. Too often “final couple” stories focus on romantic couples which limits the nuances that can be explored.  Vaughan’s stories always stick with me and this one was no exception. This post-apocalyptic offering is full of moody conflict combined with the characters’ lack of emotional intelligence which causes a pain nearly equal to that of being on fire.

There is a bit of a theme here to my picks: I preferred the stories set in contemporary or near-future worlds. The “historical” stories had a similar tone and feel to both each other and stories from other NEHW anthologies, so they did not resonate as much.

As with all other NEHW offerings, Wicked Weird contains well-written stories by experienced horror authors. It is definitely worth a read and is perfect for this Halloween season. If you own the other anthologies, you will not be disappointed by this addition to your collection.