WHISPERS IN THE EAR OF A DREAMING APE: Book Review 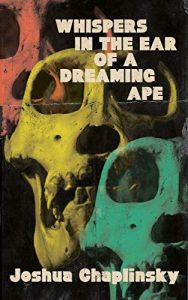 Consciousness is a surging, dynamic thing, shaped by our experiences and relationships. For the majority of us, a gentle ride on the lazy wide channel of the mainstream is fine. Existential angst sends some individuals on a desperate exploration of one or more of the many tributaries branching off the mainstream: winding, unpredictable waters claustrophobic with towering canyon walls and punctuated with deadly rapids. Judging from the contents of Whispers in the Ear of a Dreaming Ape, Joshua Chaplinsky is one such explorer. These stories are the products of a clever, seeking mind.

Chaplinsky demonstrates a love of video games and esoteric teachings. The video game has long been a metaphor for a sort of expanded consciousness in which human beings are mere avatars controlled by something more than human. This metaphor echoes much of what is found in the esoteric teachings of our world.

Readers looking for the sort of visceral horror commonly found in contemporary horror anthologies should skip ahead to the final story, “Nobody Rides for Free.” It delivers the gut-wrenching horror many fans crave. Once that appetite has been sated, the reader may then move on to the more subtle offerings Chaplinsky has cooked up.

Starting from page one and reading straight through, one might justifiably get the impression that this is not a horror anthology at all, but a sampling of existentialist/absurdist fiction influenced by Kafka, Beckett, or Camus. Horror is, after all, in the eye of the beholder. For one in existential crisis, no horror is greater than the facts we face in daily human life.

The book opens with “Letters to the Purple Satin Killer.” This story offers a sardonic examination of serial killers, the pathetic women who fall in love with them, and the confused parents who wonder exactly what went wrong.

“Twice Amputated Foot” is an odd non-horror story, part of which includes a man’s amputated foot miraculously growing back, then having to be amputated a second time at a later date. Absurd, mildly amusing, and firmly planted in the absurdist fiction orchard, this tale ponders the human tendency to fail to make proper use of miracles when they occur.

“The Black Hole” is a bar where Max hovers on the event horizon, watching the lives of those he has loved unfold without interacting in any way with the mundane, exceptional, tender or heartbreaking events. “Black Hole” is an absurdist fiction metaphor for alcoholism.

Story number four is “Homunculoid,” in which human existence is repackaged as a “retro” video game and described in detail. The metaphor plays well, and will be enjoyable to readers of a more thoughtful nature.

One of the more intriguing and enigmatic of Chaplinsky’s stories is “Maison d’Oeufs” (“Egg House”).  The reader will decide for themselves what meaning should be attached.

In “Mummers,” Chaplinsky embroiders a fanciful story from threads of actual history plucked from the life of Triboulet, aka Nicolas Ferrial (1479 – 1536), Court Jester of kings Louis XII and Francis I of France.  “The Hand of God” gives us the most direct metaphor for Chaplinsky’s struggle with religion and the god it has foisted on him.

Chaplinsky’s extensive reading and knowledge of various disciplines, whereby the powerless seek to attain that which they lack, is displayed appealingly in “Supreme Mathematics: A Cipher.”  This is less a story than a feministic interpretation of ideas from the Kung Fu tradition.

The story from which this anthology draws its name, “Whispers in the Ear of a Dreaming Ape,” could be described as a personalized examination of the masculine and feminine principles animating these human bodies, flavored by a modern tendency toward goddess worship among occultists.

“Whispers in the Ear of a Dreaming Ape” is a very compelling title, but the next story, “The Whole Infernal Machine,” could perhaps even more appropriately be a title for the anthology. This story, one of those more accessible to a general readership, contains my favorite line in the book: I get a whiff of déjà vu but it fades, like a lost sneeze.

“Aft Lavatory Occupied” seemed vaguely familiar, and possesses similarities to a short story by Stephen King, in which a woman on a plane has recurring visions. “Probability Wave” could be a good alternative title for this story. You’ll just have to read it to find out why.

“The Gospel of X” appeals to the sensibilities of those familiar with the contents of the King James Bible (and possibly those only familiar with the work of Clive Barker). It is a well-conceived and well-written parable of belief, life, and the influence of the fallen.

Though it’s not offering what most expect from a horror anthology, thoughtful seekers, the metaphysically inclined and the well-read may find Whispers in the Ear of a Dreaming Ape a compelling, thought-provoking read, the sort of thing one discusses with fellow intellectuals over coffee.

Bret McCormick is an artist, writer and filmmaker residing in Bedford, Texas.