When The Watcher Shakes by Timothy G. Huguenin – Book Review 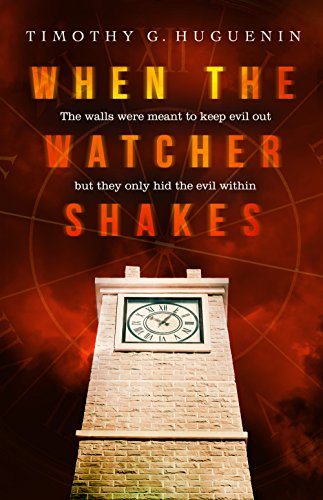 When The Watcher Shakes is an exciting, fast paced novel that shows us that things are often not what they appear to be.

John is a down-to-earth drifter who is traveling across the country to see what he’s missing by being stuck in one place all the time. His travels and curiosity land him in Abestown, a secret village hidden in a remote area. Completely walled in to keep out the evils and corruption of the modern world, the town is carefully controlled. The main enforcers are the huge Clock Tower in the town’s center, the Historians, and the Head Historian. A sort of Pagan religion, based on the teachings of a person called Abe and his Lord, is used to run the whole town and the lives of the people in it. Woe unto those who do not follow the laws! The punishments are harsh. There are very specific rules about dress, behavior, and cleanliness. Not adhering to these rules can cause your death, or you may be allowed to make atonement to the Head Historian, if he so chooses. Most people that go that route usually wish they hadn’t but, by the time they realize that, the damage has been done.

Enter into this precarious arrangement one cheerful long haired and bushy bearded traveler. John upsets Abestown’s balance the minute he comes through the gate in his colorful clothes all full of friendly Howdys and questions. He doesn’t stand bent over or wear frumpy monochromatic clothes like the residents, and he confounds them because they can’t answer his questions with anything but stuff their brains have been filled with. The only person that really connects with John is Isaac, the town janitor, who is considered to be all brawn and no brain. But Isaac is much more than that. He is the “watcher” in the book’s title. This is because he is one of the few people in Abestown not governed by the Clock Tower, so he has time here and there to watch the people around him. Once John unlocks Isaac’s brain, it keeps on working better and better until the end of the story.

Unfortunately for John, he makes a horrible enemy the minute he steps foot into Abestown. More of a sadistic Devil than a gentle patriarch, the Head Historian wants no interference from Outsiders. He makes John his target from the moment he arrives and let’s just say he’s not a “kiss and make up” kind of guy. However, some of the citizens begin to share John and Isaac’s points of view which makes for a messy situation. I do not wish to reveal much more of the storyline, because When The Watcher Shakes is a book that deserves to be read! There is just so much going on in the pages, and amazingly, Timothy G. Huguenin makes it all fit together so well. This man is a true storyteller.

Besides the increasingly urgent and scary storyline, there is a lot of social commentary here that brings Ray Bradbury’s work to mind. The depiction of Abestown’s general population being “sheep” that are so well controlled by words and enforced perceptions rings sadly true in these strange times that we live in. We may be outside those high white walls, but are we really so different from those people? Think about it. Most importantly though, buy this book!