When It’s Time for Dead Things to Die – Book Review / Interview with the Author, Clint Smith 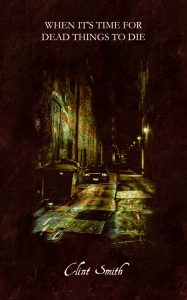 When It’s Time for Dead Things to Die
Clint Smith
2019
Unnerving Press
Review and Interview by Gordon B. White

It seems that medium-length fiction – novellas, novelettes, chapbooks, etc. – is undergoing a resurgence in popularity among readers and publishers alike. These quick bites of horror deserve their own time in the spotlight, too, so we’re combining reviews with short interviews to give these works the attention they deserve.

Clint Smith’s new novella, When It’s Time for Dead Things to Die (Unnerving Press), is an intriguing blend of contemporary, ground-level grit and a new take on old horror tropes. With gripping narrative and insight into characters, Dead Things is a delight.

The book opens with a prologue that sets the stage years before the main incidents of the book. Dripping with poetic language and lush imagery, it is by turns lurid, gory, and almost hypnotically dense with wordplay and descriptions. But, reader, hold on as the narrative shifts from the mood-setting prologue to the contemporary Rust Belt city of Gary, Indiana. It leaves behind those prior characters too, to focus on Joseph Lowe, a line chef who’s become enmeshed with the local crime family. In particular, Lowe finds himself with a pregnant girlfriend and the unenviable task of taking care of her grandfather, the elderly but still sinister mob patriarch, Gregory Bath.

It’s an interesting aesthetic strategy, opening the book with a prologue that initially seems so far removed from the meat of the plot, but in Dead Things this choice works a kind of magic. By opening so strongly and strangely, the dark magic of the prologue lingers over the rest of the story. The lingering images from the past imbue the present with a sense of menace that allows Lowe’s story to develop at a comparatively more measured pace without losing that sense of darkness. As the story unfolds, however, the crumbling setting of Gary, Indiana, and the doomed machinations of the crime boss Gregory Bath and his sons give a sense of opulent palace intrigue, helping the material rise above either straight horror or crime. Of course, things only get darker and more desparate as internecine familial politics come into play.

Although Dead Things takes place primarily over the course of one eventful night, it is interspersed with flashbacks and ruminations that raise the stakes and dole out explanation in satisfying morsels. As a result, the pace of Dead Things never lets up. It breezes along until, like Lowe, the story gets caught up in the momentum as events spiral out of control and race towards their inevitable end. It’s a short, gripping story that readers will want to finish in a single sitting.

Although an entertaining, well-paced genre tale, what really elevates Smith’s story is not merely his twist on the horror tropes and the crime stories, as creative as they are, but his grasp of the characters and their inner lives. Although the characters have identifiable roles, they don’t fall exactly into them, and the messiness of motives and desires keeps things unpredictable and raw. By the end, when the bodies have all fallen where they lie, the final arrangement is surprising but also makes complete sense.

Clint Smith’s When It’s Time for Dead Things to Die is an excellent, propulsive novella. Its mix of genre elements and strong character work is engaging and fulfilling. It’s short enough to finish in a single sitting, and there’s enough substance to make it more than the sum of its parts, despite their excellence on their own.

We’re also lucky enough to have Clint Smith answer a few questions about When It’s Time for Dead Things to Die. Thanks, Clint! 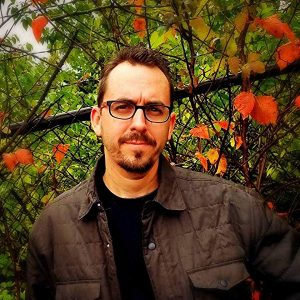 Hellnotes: Thanks for joining us, Clint! Let’s start at the beginning: When It’s Time for Dead Things to Die is an interesting mix of genre elements, from working-class slice of life to contemporary crime drama to updated monster mythology. What was your inspiration behind this story, and particularly the mixing of the genres?

Clint Smith: It started as a very simple exercise as I recounted a period when I was living in, and frequently crisscrossing, the northwest region of Indiana, just outside Chicago. At that time—this era to which I’m referring when I was in my early twenties—I was sternum-deep in a self-imposed reading regimen of both contemporary horror and Victorian mysteries; I’d also stumbled onto the bleak Richard Stark frequency transmitted by Donald Westlake. And, truth told, I was making strides to distance myself from some, let’s say, mildly unsavory individuals and their varying vices. My brother and I also never missed a Sunday night episode of The Sopranos. And so (running the reel ahead a bit), ruminating on those solitary times formed a diminutive amalgam, and I tonally sluiced into the writing which had affected me during that formative phase of living in “The Region.”

I wrote When It’s Time For Dead Things To Die while I was still attempting to have stories published by reputable magazines and anthologies. In private, and outside my daily vocation, I was having a hell of a lot of fun just trying things—testing myself, really. I’d never written a story which straight up appropriated classic (if not overused) monsters: vampires, zombies, werewolves. And so, I pursued usage of employing a vampire (still distantly dwelling on that classic Stoker tome from the aforementioned Victorian era), but I wanted to avoid “naming” it: the overt Nosferatu denotation.

HN: One of the notable stylistic elements is the way that the prologue, although tied in to the narrative by the end of the novella, initially seems to come from a different story. In a way this is because of the obvious shift in time and place, but it also stems from your stylistic choices in the descriptive details and a shift in voice. Although different, it’s an effective way to imbue the rest of the story with a lingering sense of menace as Lowe’s story in the present unfolds more gradually. How did you come to include that prologue, and was there a particular intention to the stylistic differences between the two?

CW: Truth told: I still see extensions in Lowe’s narrative, mainly in the tension which exists between mundane responsibility and the gravity of potential greatness; but, for the better part of the on-stage portion, Gregory Bath remains in the margins. So I wanted to create a preface segment that would not only produce resonance with the final scene, but honor the selected perspective of my protagonist, Lowe — the solution (pursuing omniscient objectivity) was the “floating,” disconnected perspective in the prologue and dipping directly into the consciousness of any of those individuals who initially appear on narrative scape. I found it useful to provide some accurate and fantastically real-life references to funnel into and connect with the narrative artery of this otherwise unnotable character named Joseph Lowe.

HN: Horror and crime are two areas that seem to work together quite well. It’s a fruitful area that can contain multitudes, encompassing everything from the hard-boiled work of Laird Barron and Nathan Ballingrud to urban paranormal romance. What informed your particular take on mixing horror and crime here, and in particular transplanting the Bath family to crumbling Gary, Indiana? While both crime and horror seemingly draw strength from their ability to step outside conventional rules and morality, why do you think these genres work together so well?

CS: Like numerous Rust Belt cities — in both large (obviously, we think of Detroit) and unassuming varieties — it’s chilling, personally, to appraise the chronological spectrum of a place like Gary, Indiana — a place situated near a nexus of once-great, Behemoth-like oil and steel manufacturers, and that was a main line along the “Crossroads of America” — to witness such demonstrative deterioration. These are places that populate my life and my fiction, and they are often unappealing when it comes to broaching conversations about opulent lifestyles. A place like Gary, Indiana, in my estimation, is quite suitable for a horror story.

Horror subverts the conventions of reality (and to some degree the status quo of “literary” intransigence), while crime / noir subverts the conventions of morality. Clearly, both are about exploration of either neglected or unknown fiction thoroughfares; but when you braid those traditions and disciplines together, the more dynamic examples of these stories (and their writers) produce extraordinarily difficult thematic questions, while the more enduring lot never answer those wrenching questions at all.

HN: Finally, where can readers find more of your work? Is there anything in particular that you’re working on now?

CS: Thanks for this opportunity. I’m in the finishing stages of releasing my sophomore collection, The Skeleton Melodies, later in 2019 (the publisher, Hippocampus Press, is eyeing an October release); though in the meantime, interested readers can find more stories in my first collection, Ghouljaw and Other Stories (Hippocampus Press, 2014). I also have a rather large story, “Behemoth,” appearing in the upcoming Scott Dwyer anthology, Pluto In Furs, slated for August 2019 release. Readers can also check out my website and blog clintsmithfiction.com for more.