What October Brings: A Lovecraftian Celebration of Halloween – Book Review 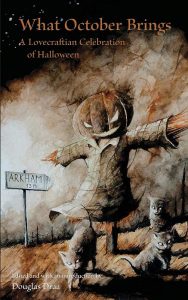 With a Halloween anthology, one would expect a few tricks in with the treats. One would be wrong in this case. Eighteen tales and each one is a treat, starting with Lovecraft himself, and his 1926 poem “Hallowe’en in a Suburb.” As Paul Dale Anderson’s narrator notes in his story, Lovecraft, and Halloween, and inescapable horror are synonymous. Of course Anderson’s story, “That Small, Furry, Sharp-Toothed Thing,” also has the year’s hot costume being Brown Jenkin, so he knows a thing about inescapable horror when he sees it.

Some of the stories are more overtly “Lovecraftian” than others, but none feel forced. Some, like Arinn Dembo’s “The Immortician” is a slight nod to “Herbert West” with a hint of Henry Whitehead added. The reinterpretation is not distracting, nor is remembering who “The Harlem Smoke” was in the original story necessary since this is an alternate world/reanimation story.

And the surprises continue through the book – Nancy Holder pits Baron Semedi against Nyarlathotep, and only one little girl can sense the war of the dead. And no anthology would complete without a Tillinghast dabbling with resonators, and several visits to a seaside community built on the former site of Innsmouth. Even the Yellow King comes to trick or treat when the veil is thinnest, but he seeks no candy.

The best twist ending comes from Chet Williamson. His “Hell Among the Yearlings” demonstrates both his unparalleled skills as a writer and his familiarity with Folk music of the Appalachians, A bluegrass music school recital at Halloween lulls the reader into thinking, with the book’s theme, we’re reading a Manly Wade Wellman story. But it turns out Silver John is actually Erich Zann, which is an entirely different field of musicology.

Don’t let the October theming deter you from this one. It is masterfully curated by Dra and a delightfully grim look at how the Old Gent from Providence can still influence and inspire. And in the world of Howard Lovecraft isn’t every day Halloween?