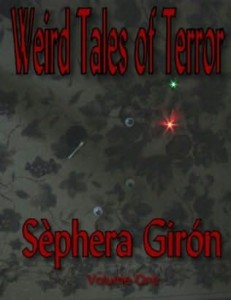 WEIRD TALES OF TERROR: VOLUME ONE

Award-winning author Sephera Giron has released a collection of never-before-published fiction: six short stories, including a novel, The Witch’s Field. A hefty work indeed of early excursions into spaces where trauma, insanity, isolation, and sex collide with horror and the occult.

For early work this is well-crafted, potent material. During the read, I kept telling myself: “This stuff is like Joyce Carol Oates as directed by David Cronenberg.” In case you missed it, that’s meant as a compliment.

The first piece, “Wanna Go for a Ride?”, chronicles a lonely night out with new-in-town Brenda. When even a strip-club fails to inspire enthusiasm, Brenda heads for her car, fires up the friendly bud, and drives to a moon-lit beach for comfort. She soon discovers the quiet is populated by others, the first of whom—Andrea—is a beautiful, gentle woman with a lilting accent, who seems to know a lot about Brenda. There follows passage into a liminal realm we all might desire to visit, but the denouement—by its very reasonableness—caught me by surprise; something I wish would happen more often.

“Mmm Chicken” (hats off to the title alone) is told from what at first appears as a skewed angle—and actually is, for Jessica, our protagonist, inhabits a…never mind. You’ll get there.

In “Jean Jeannie: Are You a Boy or a Girl?”, Jean loves her Bobby, but nonetheless experiences a surging possession by an unusual type of erotomania—almost male in both intensity and physical manifestation. Bobby loves Jean (refreshing in any context, because rare), so happily—if slightly concernedly—she joins in.

My personal favorite tale, “What Would Lizzie Do?”, is one with which I didn’t want to part company. Nicole, our protagonist, enjoys visits to the Lizzie Borden house, Borden graveyard, and Maplecroft—Borden’s home after the famous trials. Now, with members of a Toronto-based ghost-hunting group, Nicole’s seriousness of intent appears to be paying off.

Those who appreciate Henry James’ classic The Turn of the Screw will find much to like here. With echoes and suggestions of what really was going on in Borden’s life (sexual abuse a definite possibility), the narrative resonates with the gravitas and sadness of history. The other ghost hunters view any suspected paranormal phenomena as “cool,” akin to an adolescent camp-out. Nicole, however, is of a different order (and temperament), and her glimpses of whatever might haunt the old house give the reader a good dose of paranoia. Is Nicole nuts, or a genuine empath capable of interacting with “ghosts?”

“Release” is a quiet study of personal disintegration that, beneath its veil of everydayness, seethes with ever-mounting tension. Again, the deadpan flatness of Giron’s prose renders the delusional (or not) behavior of Kathy, recently released from a mental hospital, almost mundane.

From the outside, Kathy appears rational, until nosy Mrs. Clark—her social worker—pays a visit, hands “…giggling like little children.” Appalled over Kathy’s stinking apartment, the worker lingers until the kitchen is up-to-snuff. But Kathy’s head isn’t so ordered, crowded with voices that want out.

Kathy’s history is one of self-mutilation—or “cutting,” her scarred body a literal map of misery. An epiphany brought on by a picture in an old library book charges her with purpose. Kathy’s “self-medication” exemplifies my assessment of Giron’s work as Joyce Carol Oates directed by David Cronenberg. See if you agree.

The final tale is a full-blown novel, The Witch’s Field, which Giron says never fit into any genre slot. As much as I dislike categorizing, I think “weird” or even horror-fiction fits, but it’s not my place to pigeon-hole another’s writing.  “Novel” is fine with me, and this early effort is just that.

Bertha Raven—Birdy—is, as they say, getting on in years and suffering various ills. Daughter Karen isn’t overly sensitive to these and has ambitions of moving Mother out of the old remote farmhouse and into a “home.” Russell (Birdy’s loving, supportive grandson), who does see some logic in Karen’s viewpoint, nevertheless tries talking her out of it, as he visits the house daily.

Directly after a snowy Halloween, Birdy ventures outdoors and discovers on her land the burned remains of some “animal”—but writes it off as a prank. Russell, possessed of younger eyes, disagrees, and the police take over, soon carting away the evidence. Birdy picks up what appears to be Halloween litter, but finds instead a sign: Beware the Witch’s Field. She burns the insult in her fireplace.

Giron is adept at evoking nature in all her moods, lending realism lesser writers might ignore. Birdy’s Rivergate is as real as Birdy, as sad and tragic and decaying. Meanwhile, the strange violent event is reported to the media, and reaches the ears of Cassie (palm-reader), Maj (crystal ball-gazer), and Aurora (painter of auras), as they stop their canary-colored van for rest and a few beers. Hearing of the Rivergate doings, the three set out on the proverbial road-trip, as they have genuine interest in matters paranormal. Their discussion of a metaphorical (or actual?) Gateway says much about the trio’s emotional bond which, upon reaching Rivergate, they shower on long-suffering and ever-confused Birdy. This meeting is nothing but uplifting to her, and deeply disliked by Karen. Not long after, Russell “hijacks” Birdy who wants to again meet with her new friends at a psychic fair. Karen (Russell’s mother), thinking Birdy asleep later than usual, heads out to explore the old barn, and discovers…well, we can’t say. The trio are surprised and pleased to see Birdy, who shares a recurring, distressing dream of evil, while also a haunted yearning for an enigmatic, enchanted place.

No matter where Giron takes us—houses, barns, landscapes, rivers, the open road—we see our shared (if often subconscious)  inability to forget the infinite weight of certain emotionally-charged moments in time. The yearning for an eternal space where time is unknown.

As Birdy, in an especially poignant moment, says to Russell: “You think you own your dreams but you don’t. You dream other people’s dreams, they dream yours, you can help or you can run away…”