We Are Monsters – Book Review 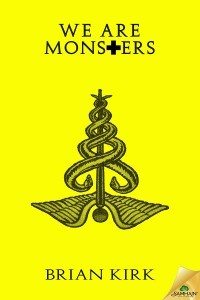 Brian Kirk’s new Samhain release, We Are Monsters, employees the tried and true horror setting of the mental health asylum to ask some provocative questions: What does it mean to heal the mentally ill? Who really needs healing? and Who are the real monsters? The employees and patients of the Sugar Hill state hospital become involved in a reality bending conspiracy to use experimental treatments to cure schizophrenia and the results are horrific. The story has strong characters and starts very strong before slowing down some in the hallucinatory third act.

The novel starts off strong with the main character, Dr. Alex Drexler, administering an unapproved trial drug to a restrained patient. After just a matter of moments it becomes clear that things have gone very wrong and that Drexler will have to take extreme measures to see his experiment through to its conclusion. His desire to complete his work soon becomes central to the goings on at his main place of employment, Sugar Hill hospital. Drexler has to navigate the maze of employees from his boss, Eli Alpert, who knows nothing of the experiment, to board member and chief supporter of the experiment, Mr. Bearman, who pushes Drexler to use his new procedure on Crosby Nelson. Nelson is the famous Apocalypse Killer, a clearly paranoid schizophrenic man who appears to be a perfect test subject, but will end up being the downfall of all involved.

The plot starts off strong, establishing a cast of believable and relatable characters and a realistic setting in the Georgia state hospital, Sugar Hill. In the first act, the doctors, counselors, orderlies and patients have a rich a thoroughly developed backstories, and in establishing this the story never becomes bogged down in exposition but keeps plowing ahead. Dr. Drexler’s need to prove his experiment a success leads him to try it on his mentally ill brother. The experiment with his brother ends in tragedy for his family and the hospital. The second act follows the hospital through changes in the wake of the events with Alex’s brother. Dr. Drexler is forced into even more drastic actions when his entire professional life is put at risk.

The third act is, in concept, a fascinating idea. It forces mental health professionals into a situation where they must deal with hallucinatory mental states themselves, effectively putting them into the position their patients have always had to deal with. While the concept works, the execution is lacking. There are three parallel narratives at this point and only the one focusing on Dr Drexler fully works. The threads about Angela, the counselor, and Dr. Alpert, the boss, seem extraneous to the greater plot, as did shorter passages about them earlier in the work. The backgrounds of these characters is filled in here, and some readers may appreciate that, but it takes a while to get there.

The end of the story is satisfying and worth the digressions of the third act, especially considering the strength of the majority of the novel. We Are Monsters is a solid horror novel and an entertaining read, but it is the discussion of mental health and its attendant issues that makes it really worth the read. Author Brian Kirk manages to strike the delicate balance of discussing pressing social issues without ever resorting to preaching to the reader.