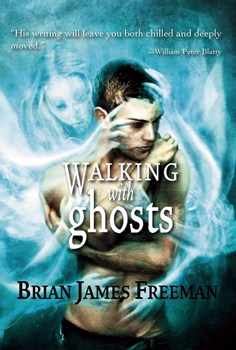 Brian James Freeman is a well respected author of short stories in the field of dark fiction. His specialty is what we used to call “quiet horror”(the master of which was Charles L. Grant), meaning a type of horror fiction where the reader is disturbed and unsettled in a gentle, but deep fashion, without making use of gore, unnecessary violence, and graphic details. The exact opposite of so-called “splatterpunk” but, in the end, much more effective in producing shivers and fright.

British renowned imprint PS Publishing has collected in a hefty volume thirty stories, mostly reprints, split in four different sections called “Weak and Wounded,” “More Than Midnight,” Dreamlike states,” and “Lost and Lonely,” a questionable choice perhaps, but in the end what really matters are the stories. And they are very good. So good that it’s hard to pinpoint the more accomplished, being impossible to comment in detail upon each one.

“What They Left Behind” is a tense, terrifying story about unholy presences lurking in a dilapidated warehouse, while “Running Rain” is a fine piece of psychological horror where a compulsive runner is haunted by the death of his only son, murdered by a mysterious serial killer.

In “Walking with Ghosts at Pier 13,” melancholy, loss, personal ghosts, and the shadow of terrorism blend in a sad, disquieting tableau depicting all the desolation of an almost deserted place.

“Pop Pop” is a very smart variation on the theme of serial killer with a nice, unexpected ending.

The vivid “Among Us” describes how daily life can become a living nightmare as the true nature of “normal” people gets disclosed, while “How the Wind Lies” represents an atypical, quite disquieting story of vampirism, apparently to be traced inside the victims’ family.

“Mama’s Sleeping” is a chilling story with a double twist in the tail; “The Last Beautiful Day” a perceptive, moving story featuring a man choosing an unorthodox way to pay homage to his stillborn child and “Perfect Little Snowflakes” is a dark drama about two teenagers and an unwanted pregnancy.

In the outstanding, chilling “One More Day,” a man keeps being horribly punished for a deed of the past, while in the strong, horrific “Not Without Regrets,” Freeman gives a demonstration that, if he wants, is perfectly able to shift to violence and madness to build a good story.