Voices of the Damned – Book Review 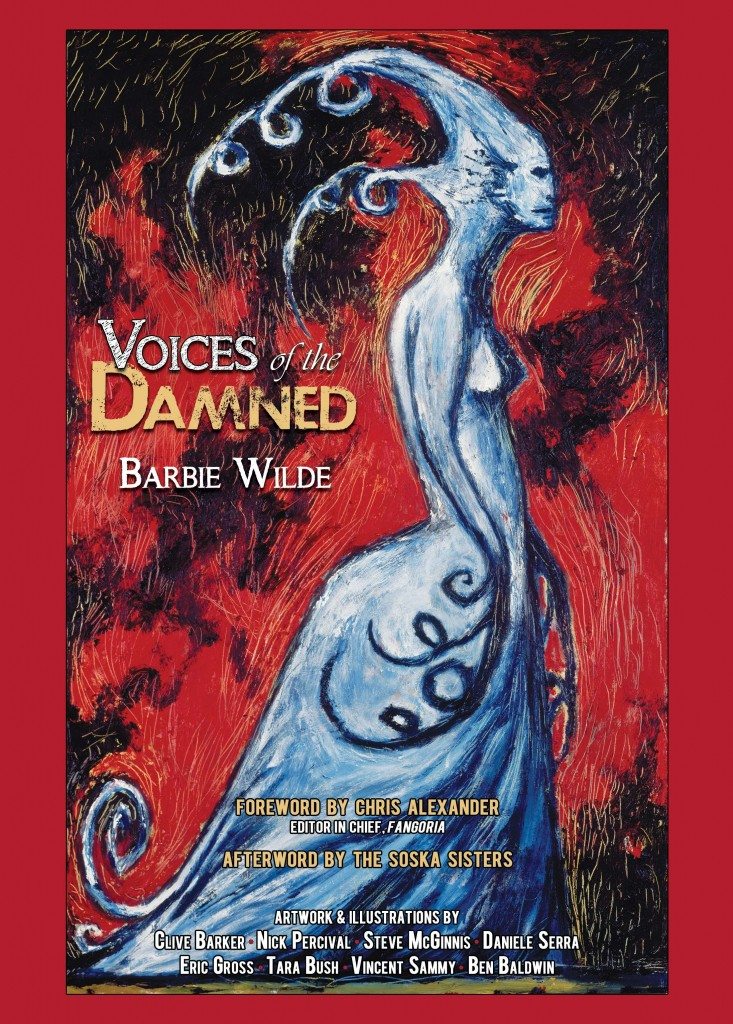 Barbie Wilde may be best known to horror fans as the female Cenobite in 1998’s Hellbound: Hellraiser II, but she has had a diverse international career in dance, music and television. Her first foray into writing was a short tale entitled “Sister Cilice” in the anthology Hellbound Hearts (2009; Gallery Books), an anthology of short stories set in the universe of Clive Barker’s Hellraiser that featured many stories from people connected to Barker and the Hellraiser films. After a number of short fiction sales to anthologies and magazines and her first novel The Venus Complex (2012; Comet Press), she published Voices of the Damned.

Voices of the Damned contains eleven stories, ten of them reprinted. The book itself is a striking product: a substantial hard-bound edition featuring a brilliant scarlet cover with art by Clive Barker (paperback and electronic editions are also available). Each story is accompanied by original interior art and contents are framed by a forward and afterword from Fangoria’s Chris Alexander and filmmakers the Soska Sisters, respectively. All and all, the publisher has produced a beautiful volume to showcase her work.

The collection has been very well-reviewed, and so my expectations were high. The strongest work in the volume is probably the stories that comprise the Cilicium Trilogy: “Sister Cilice,” “The Celicium Pandoric,” and “The Cilicium Rebellion.” These stories chart the course of the female Cenobite, and draw on the Hellraiser mythology effectively, while taking it in new directions. As you might expect, these stories all use a heady mix of sexuality infused with pain-as-pleasure. Wilde pulls no punches in her descriptions of psychosexual agonies. In fact, themes of sexual liberation and transgression pervade the collection. Bodies are portrayed as battlegrounds for control and agency, in explicit and bloody fashion. Pain and mortification are embraced. The psyches of the characters are not spared either. They are frequently betrayed, abused, and otherwise assaulted. It is almost as if, in the absence of emotional connection, only bloody physical congress and shared pain can connect people in the world of the damned.

This is a collection that will appeal to readers who like their horror carnal and their erotica tinged with blood and pain. There are few happy endings, and all victories come at a staggering cost. Wilde’s voice is still developing, but the rawness and directness of her prose is well-suited to the subject matter. Ironically, despite the way in which her characters are laid bare, body and soul, I found myself wanting more from Wilde herself. An underground legend, she has led a rich life, performing in a Bangkok cabaret, appearing in a number of films including a Bollywood blockbuster and the legendary unreleased film Grizzly II: The Concert, which has only appeared in bootleg. She is an accomplished music writer and interviewer for television and a founding member of SHOCK. SHOCK was a mime/dance/music group that was at the forefront of the British 80s New Wave, performing across Europe, releasing two albums, and working with major figures such as Gary Newman, Adam and the Ants, and Depeche Mode. With such a dynamic and interesting personal history, I was surprised that so many of the stories took place in fairly ordinary and generic locations. Although that choice might serve to heighten the contrast with the very gruesome and disturbing events of the stories, I can’t help but think that there is a whole other level of weirdness that Wilde can tap into in her future work. That is to say, “No more teasing, Barbie, it’s time to play.” I look forward to the sights she has to show us in the future.