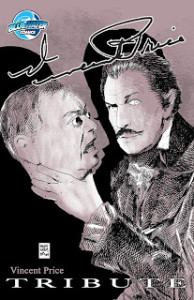 LOS ANGELES, CA – September 9, 2013 – The Vincent Price brand at Bluewater has be a staple for over 5 years. On September 11, Bluewater will be delving into the non-fiction world of Vincent Price with a Tribute bio of his life story with a foreword by Roger Corman. Bluewater’s popular Tribute comic book series, takes a look into the life of the master of classic horror Vincent Price. Price has been a master of all things horror and terror for almost the full 100 years since his birth. He’s been in music videos and read the most dark and stormy of stories, and he’s been in every aspect of the horror genre, but now, you get to take a peek inside the coffin and will gasp in shock and awe at the story that will unfold. Come inside and take a seat, the time of your life is about to begin.

The 32-page comic book released this week, is written by CW Cooke and drawn by V. Kenneth Marion with a cover by Taylan Kurtulus.

“The Tribute line of comic books tells the stories of the classic entertainers that have passed on,” says Bluewater publisher, Darren G. Davis “It is a way for us to honor these people who have made a difference in the world.

Previous subjects that have been featured in the “Tribute” line include Elizabeth Taylor, Frank Capra, Michael Jackson, Marilyn Monroe and James Dean. All of them can be found digitally on iTunes, Nook & Kindle, and in print at Comic Flea Market.

Print copies of the book can be ordered at Comic Flea Market: http://bit.ly/1awvmq5

Click here to see the book on iTunes: http://bit.ly/1evMpYs