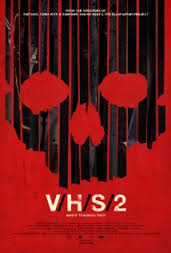 Last October fans of horror were treated to a little film called V/H/S, an anthology horror movie made by some of today’s up and coming genre filmmakers. It was an uneven film that didn’t fully deliver on its promise, but worked pretty much, and had a segment or two that were original and scary.

As a rule, sequels in any genre are usually inferior and massively sub-par when compared with the films which begat them.  V/H/S 2 raises the bar and gives us that rarest of rarities; it is a sequel that is better than the original film.

The film is designed in the same manner as the first one; characters in a house stumble on a set of creepy VHS tapes and watch each one. What they see on the tapes is bloody and terrifying, literal horror shows.

In this film we follow two private investigators as they search for a missing college student. When they enter his house, they find the tapes and the female investigator learns she must watch them in a certain order to find clues to his whereabouts. As in the original, he/she who watches the tapes will encounter tragic consequences.

Simon Barrett, who wrote the sadly underrated horror film A Horrible Way to Die, writes and directs the segments with the investigators and fills them with the proper creepiness, giving us bookending moments that don’t interfere with the flow of the film, as the original fell prey to this, and a truly scary end to the proceedings when the film comes to a close.

Segment one is Clinical Trials and is directed by Adam Wingard who directed A Horrible Way to Die. Wingard also stars as a man who gets an eye transplant and is suddenly haunted by ghosts. It is a good but not great segment, but the director does fill it with some clever ideas and some of the ghost scenes are effective. I couldn’t help comparing it to the Pang Brothers more effective Korean horror film, The Eye. Wingard’s effort isn’t near as spooky as that film but is a good enough segment to begin the film with. Sadly, I wanted more and feared that this sequel might become as underwhelming as the first film. My fears were vanquished as the next segment began.

Segment two is called A Ride in the Park and is brought to us by Eduardo Sanchez, co-director of The Blair Witch Project, and Greg Hale, who wrote and directed a quirky little horror/comedy film titled Say Yes Quickly. This is an exciting and interestingly done segment. It follows a cyclist who mounts a camera on his head and goes out for a ride. The problem is that there are zombies that begin to attack and we see the carnage, and it is bloody, through the lens of his helmet cam. This sequence is wholly original and very creative with the best moment being… nope. You will have to discover that for yourselves!

Segment three is called Safe Haven. It is directed by Gareth Evans, who directed last year’s action masterpiece The Raid: Redemption, and Timo Tjahjanto, who directed the “L” is for Libido segment from The ABC’s of Death. This piece is the longest of the bunch and is a near masterpiece of tone as it sets us on the edge of our seats with tension and doesn’t stop until its last shot. It concerns a film crew in Indonesia who arrive at the grounds of a cult to interview their leader and his followers. The leader is very creepy as are the followers. After the film crew arrives and begins the interviews, truly terrifying and extremely bloody hell begins. It is a marvelous segment and really captures the essence of true horror in a very real setting. There is nothing supernatural here. The terror is real and relatable. Macabre and insanely terrifying, Safe Haven is the best chapter in the film.

Segment four is my second favorite. Directed by Jason Eisner, who gave us the “ode to Grindhouse cinema” thrill ride Hobo with a Shotgun, Alien Abduction Slumber Party is a close second to Safe Haven and is a short blast of scream inducing fun. The segment is exactly as the title states; teens throw a slumber party and are attacked by very creepy aliens. Running at just under fifteen minutes, Eisner’s segment is a true amusement park thrill ride. The attack begins rather immediately and doesn’t let up as we are treated to many jump scares that work perfectly and a scenario that sends chills down our spines. The director never lets up as his camera is never still. The “jittery camera to portray panic” is over done in cinema but it works here, as the most amazing part is that the action is all seen through the lens of a camera that is mounted on a dog! Alien Abduction Slumber Party is a raucous good time and a very scary horror/sci-fi short. It also has the best title of all four segments.

V/H/S/ 2 is a proper thrill ride of a movie and surpasses the first V/H/S in leaps and bounds. This film has a better flow, is scarier and more original, and is put together by directors who truly love their genre and stop at nothing to give fans the chills and thrills that we starve for. This film is an instant genre classic!