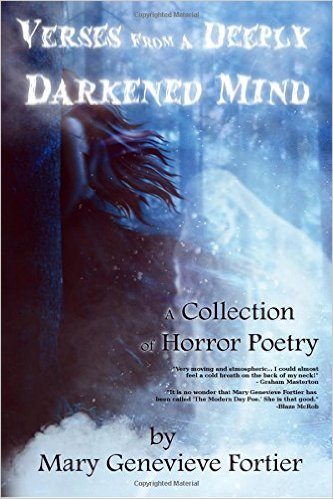 This book of horror poetry is unique because many people equate poetry with love sonnets or inane verses of stuff that rhymes but doesn’t make any sense. Not so in this jam-packed offering! Verses From A Deeply Darkened Mind wows and scares — especially if you are foolish enough to read it before bed in a dark house like I did! While there is a fair amount of rhyming, the similarity ends there. Many of the poems sound like spells or incantations to call up evil spirits or creatures to rattle the doorknob of your room. These horror poems are most effective when read out loud. Sometimes on paper the words lack clarity and punch, but as soon as they are spoken…Wow! Just don’t blame me if you suddenly have unwanted companions.

As a poet who often writes about grim or frightening topics, I was eager to check this book out. The language makes me think of Edgar Allan Poe and H.P. Lovecraft because it feels ancient but there are enough references to keep it current. Author Mary Genevieve Fortier’s hooded face and leather pants give her a gothic rock star look that reminds me of Jim Morrison and practicing witches that I have met. This is one writer who walks the walk and doesn’t just pay lip service to a lifestyle. She also gives more than your money’s worth with this collection, which is extensive.

The “Terror Train” saga of connected poems is very cool. I also really like “Soon Be Dead” with its bits and pieces of musical jargon tossed with mounting dread of what is coming up. She even uses the brand name Fender to pull us in closer. A shrouded spirit playing a Fender Stratocaster with boney fingers that blaze up and down the fretboard came to mind when reading this. There is ethereal murk that things swim in until they are suddenly right in your face and doing hideously bad stuff. I like that a lot.

I reviewed a proof of Verses From A Deeply Darkened Mind, so perhaps the few negatives I have to say have already been remedied. Poetry is a powerful rush of feelings and images that often gallop into the writer’s mind — this puts us in the position of transcribing what’s beaming in as fast as possible so we don’t lose it. Later, we grab a coffee and take a hard look at it. Is it any good? Can we make it better? During this process we check spellings and punctuation because we want to get this into your head as clearly as possible. There were some poems in this book that could have benefited from a bit more of that. That is my opinion as a reader and a writer, yours may vary. The worst thing though is all of the old English font used for the titles and forward of the book. I understand that you are trying to impress on the reader the ancient timelessness of where your writing comes from, unfortunately it just makes for really difficult reading. This is especially true in the digital form.

Those two small gripes aside, Verses From A Deeply Darkened Mind is a cool book. Buy this and show it to your friends who say poetry is for sissies. You also might want to bring along a fresh pair of undershorts for them to change into when they’re done reading.