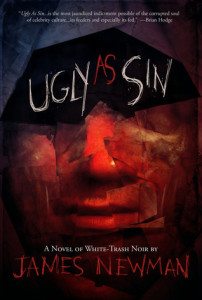 Nick Bullman is a professional wrestler adapting the villainous moniker The Widowmaker. Engaged in every conceivable bout and tawdry storyline, Bullman has enjoyed a storied career. One ill-fated day a group of overzealous fans changed everything. Now dreadfully disfigured, his reality is more horrifying than his character could have imagined in his wildest dreams. Estranged from his family and suddenly unemployed, Bullman receives a distressing phone call one day from his daughter. His teenaged granddaughter has been kidnapped without a trace. Will the ex-pro wrestler be able to overcome the odds and all adversity when it counts most, or will he simply submit to his tormentors in Ugly as Sin?

Author James Newman’s novel, depicted as a white trash noir, emulates the realm of the squared circle in seedy, fantastical ‘kay-fabe’ grandiosity. Clearly one does not have to be a fan of professional wrestling to truly appreciate the story telling merit of this novel. Never fear, turnbuckle titans, rabid fans of sports entertainment will be hooked within two pages.

It’s evident the author is a fan of spandex and cauliflower eared ballet as he paints an often grisly and disturbing picture of social deviance. The celebrities that are idolized and the horrific reality that some fans simply cannot distinguish between fantasy and reality are the elements that breathe refreshing life into this plot. A psychological thriller at its finest, the genuine fear factors are exemplified through Bullman’s confrontation.

At first glance, the character of Nick Bullman and his alter ego of The Widowmaker are reminiscent of WWE Undertaker fame. There are undeniable parallels between the two imposing giants in everything from stature and prowess to psychology. Whether or not the similarities are simply coincidental or not, the demonic like deity known as the Phenom seems like an obvious choice for the horror genre.

Descriptions in the opening sequences of what transpires to create Bullman’s disfigurement is not for the faint of heart. The mortifying onslaught that ensues at the hands of mentally unstable fans is gory, graphic and deeply unsettling. The action that ensues is born of the same cloth that would make one Clive Barker proud.

The plot continues to manifest into something immensely infectious, the type of novel that is easily digested within two to three sittings. A number of underlying themes such as remorse, family ties, and a persistent desire to correct all of the wrongs are endearing and conjure a sense of empathy towards our lead protagonist. Readers cannot help but subconsciously cheer Bullman on in his seemingly impossible quest to find his abducted granddaughter.

As Bullman morphs into the unlikely role of bounty hunter and detective on steroids, the reading audience readily adapts the transition with little to no resistance. On the surface the likelihood may seem ludicrous, yet we want to see his character prevail as he unveils one clue after another in finding the little girl he’d never met face to face.

As a reluctant confessor to being a fan of sports entertainment, I would have like to have seen more references to Bullman’s involvement in the arena. However the interactions outlined with other notable characters later in the story more than make up for any lack of play by play action in the pages. I was especially fond of the method in which the afterword was constructed depicting the Nick Bullman character in an interview type setting with a sports journalist. The draft even hints upon the possibility of a potential sequel. Readers curious about the works of James Newman would be strongly advised to begin with Ugly as Sin and will no question be victorious in the collective pursuit of gripping entertainment.