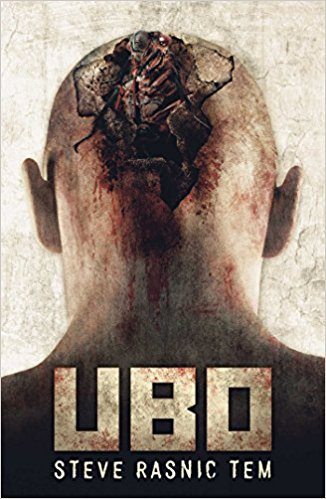 While UBO is simply listed as being Fiction/Horror, I think it could be labeled Horror/Sci-Fi/Historical Fiction/Psychological Thriller. However, that would take up a lot of space and perhaps be messy. But that’s what you get in this book. I think it’s fair to say that it would be good to have your historical facts straight to get the most out of reading Tem’s latest novel because they form a pretty wide base for what he is trying to show us. There are a lot of connections made to the Holocaust and the horrible prison death camps from both the prisoners’ and their demented captors’ viewpoints. We also see into the twisted minds of other killers and experience what was happening when they were active.

The way we get inside these infamous destroyers of life is through Daniel, a prisoner stuck in UBO. After being kidnapped by giant roaches who are very powerful, yet scientific, he is forced to relive scenarios by inhabiting the brain of say, Joseph Stalin. The roaches take notes and make adjustments until they are satisfied and then Daniel is returned to the barracks to recover. He is not alone, this is happening to hundreds of men and women stuck in the huge old building that is isolated outside of Boston. Many of the people do not return after their scenarios, or come back so scarred that they are unable to do much except stare at the distant city which has undergone an apocalyptic change. Even if they were to escape from UBO, would life among the burning ruins be any better?

Daniel has a few acquaintances that he renames with historically significant names because he doesn’t want to get too close to them. That way he won’t feel loss so strongly when the roaches make them disappear. Well, that’s his plan anyway. As the book continues this small group of men stay together and form bonds. They do care about each other which turns out to be pretty interesting near the end of the book because things are not at all what they seem to be. Meanwhile, the huge concrete building they are housed in crumbles and is blown apart more, until it is not structurally sound. The prisoners’ schedule becomes chaotic and their captors act in an increasingly erratic fashion. Outside UBO’s walls the fires in the city burn higher and the ocean gets closer. What the hell is going on?

The last quarter of the book reveals a lot of information and the events that unfold are a catastrophic hurricane of horror, revelation, and confusion. Yet, through all that – Love wins. Not in a sexy, romantic way. We’re not talking about lust here. This is the all-powerful foundation emotional reflex that can be learned but not destroyed. Check out the quotes from Erich Fromm at the beginning and end of the book for expert testimony. Heavy stuff!