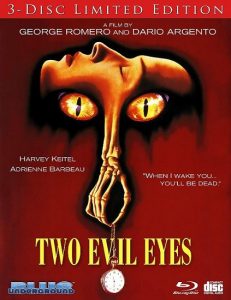 On paper this movie sounded like a great idea. Take two certified masters of terror, have them both adapt and direct tales from an originator of the horror genre, mix in some cool splatter, and BANG – instant classic. However, this wasn’t to be the case with this film. For some reason it never made a big splash and today it is largely forgotten, despite having some major league talent in it. The directors I mentioned before are Dario Argento and George A. Romero, two guys that between them have made some of the best, most memorable horror films ever. The author I hinted at is none other than Edgar Allen Poe, one of the granddaddies of the modern terror tale. As for actors, cult favorites like Adrienne Barbeau and Tom Atkins can be found doing their thing in these two short-ish tales, as well as veterans like Harvey Keitel and E.G. Marshall. Yet with all that, most newbie horror fans have probably never seen this one before, so here, let me tell you about it.

Each of these two movies is about an hour long and the first has George Romero doing what he does best and giving us a film full of undead goodness with “The Facts in the Case of Mr. Valdemar.” Adrienne Barbeau plays a money-grubbing wife of a sick, much older husband who she keeps in a hypnotic stupor and close to death so that she can milk him for all his money before he dies. She is aided in this evil endeavor by her husband’s doctor, who just so happens to be her lover. Then one night Mr. Valdemar dies, but since he died while under deep hypnosis, he doesn’t pass on to the other side. Can you say vengeful ghost zombie out for blood? I knew you could. In this case the blood is ably supplied by makeup effects genius, and long time Romero running partner, Tom Savini.

Italian horror maestro Dario Argento puts his stamp on Poe’s classic, “The Black Cat.” Actually, it borrows bits from many Poe stories, such as “The Pit and the Pendulum,” “The Cask of Amontillado,” and a bit of the “Tell-tale Heart.” In this short, Harvey Keitel plays a photographer named Usher (hah, get it) obsessed with death, teetering on the brink of madness and taking his obsession to the next level. Looking for an outlet for his homicidal impulses, he kills the titular feline only to enter a world of nightmares, madness, and murder. Of the two, this was my least favorite, but it was still pretty good, if somewhat disjointed and schizophrenic.

On to the extras that Blue Underground has put on on this three-disc collector’s Blu-ray. Well, right off the bat, one of the discs is a CD of the movie’s soundtrack, and that rocks. Literally. Then there is a feature-length commentary track with author and Dario Argento biographer, Tony Howarth. Then there are interviews. A whole bunch of interviews. So many interviews that I won’t list them all here as they’re with over a dozen people with such notable folks as Dario Argento, Tom Savini, Asia Argento, Adrienne Barbeau, and even the late, great George Romero. Then there is a featurette about Tom Savini‘s special makeup effects and a tour of Savini’s home and studio. A trailer, a poster, stills gallery, and a collector’s booklet round out this very impressive package.

Two Evil Eyes is a fun double feature of Poe horror by two masters of the fright film and a whole bunch of talent both in front and behind the cameras. If this one has passed you by, rectify that oversight and get this new super-duper edition from Blue Underground. Consider this one well recommended.