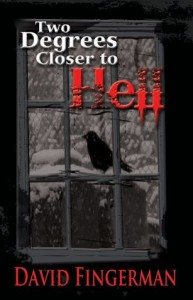 Single-author collections tend to be hit-or miss. Unless the author has sufficient range in style and tone, the stories often end up being too similar to each other. With Two Degrees Closer to Hell, David Fingerman avoids this pitfall in a number of ways.

Derivative as they may be (many of the offerings here are similar to The Twilight Zone or The Outer Limits structurally and thematically), the stories feel fresh. Fingerman has a unique voice, and for the most part these stories are clever, thoughtful, and imbued with a wicked sense of humor.

Here you’ll find classic revenge tales (whether the payback is human or karmic in nature), Faustian bargains, tales of magic and tales of obsession and paranoia. Many stories are speculative forays into death and the afterlife.

The longer stories naturally focus more on character development before the pivotal final twist, and in these stories Fingerman lays out more “ground rules” for the fantastic elements. It’s much easier for the reader to both empathize with the characters and suspend disbelief.

The shorter pieces are often vignettes, by turns nasty and utterly bizarre. They work well as a much-appreciated change of pace.

It’s in the mid-length pieces that the collection generally falters. Some of them feel rushed toward the end, the conclusions feeling more muddled than consciously ambiguous.

That said, none of the stories here are flat-out not worth reading, which is an impressive achievement in its own right, given the length of the book. There are a number of genres here, too, ranging from fantasy to horror to noir to sci-fi.

Family Reunion, told from the perspective of a man suddenly living in the body of a cat.

Two Degrees Closer to Hell, a well-structured take on the afterlife that echoes Matheson’s What Dreams May Come, with a great ending.

Obsessed, a story of a stalker who gets his just desserts (or possibly not).

Tax Exempt Status, a touching story of two couples, mad science and the lengths to which people will go to protect and save the ones they love.

David Fingerman has a dark and sharp imagination, and showcases a wide array of twisted tales with Two Degrees Closer to Hell. This is a fun collection that works its way into your mind and heart. If you enjoy speculative tales of the uncanny, rest assured you’ll be getting your money’s worth.