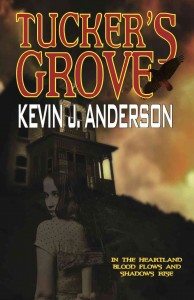 Over the years, much has been said and written about Kevin J Anderson. Although his name and countenance do not at present appear under the word ‘Prolific’ in any dictionary, I’m almost positive it does in some alternate universe. Or perhaps ‘workhorse’ is the more apt description we are looking for here. Whereas some writers are content to publish a novel a year, Kevin has adopted the more streamlined approach of releasing multiple well-received books over every twelve month cycle – each of them inhabiting different mythologies and platforms over a wide spectrum of genres. Part of this can be attributed to his eccentric yet genius ability to dictate stories while hiking in mountainous terrain (it obviously makes for productivity) – while another facet is sheer hard work … not only composing the books, but infiltrating every aspect of the process: attending conventions, singing books, meeting fans, tutoring the up-and-coming, collaborating, editing anthologies, giving out blurbs, hosting awards, sitting panels, joining advisory councils … and this isn’t everything. To say he deserves success is an understatement. Though he may have a history of inhabiting already established realms (Star Wars and Dune), I can attest Kevin’s own mythologies are every bit as intricate as those he uses as a playground.

First released in 2012 first as an eBook, Tucker’s Grove chronicles a group of interlocking stories centralised around the dark Midwestern town of Tucker’s Grove. Though sometimes the connection is loose, there is still enough cohesion overall to give the mythology a sense of continuity.

Set in the days before Tucker’s Grove is fully established, Bringing the Family records the journey of Mr. Deakin and Clancy Tucker. After a tornado devastates his land, Mr. Deakin cannot refuse the work offered his way … helping one Clancy Tucker escort his deceased parents by horse and cart across endless prairies in order to fulfil a promise. The only catch: a ritual of digging up the coffins each night and reburying them on a slow journey to Wisconsin. A bizarre obligation, but one he doesn’t question … until the night Clancy passes out from whiskey and the sacrament isn’t performed. A tale that lays the ground work, Bringing the Family is a short, somewhat satirical stab that sees Kevin giving rise to zombies in a frontier setting.

More in line with the dark fiction promised, Church Services gives us the story of Jerome Tucker – a preacher and carnival-tent exorcist in Wisconsin’s still uncharted lands. In possession of an ancient urn – or, more specifically, a demon jar capable of imprisoning spirits freshly expelled from human hosts, Jerome never thinks that he might be feeding the demons by containing them with his blood. Here, we have another tale that acts as fertilizer for the foundation of Tucker’s Grove, nourishing the soil with corruption for the generations to come.

A snapshot of the American Indian War takes centre stage in Last Stand. Beleaguered and outnumbered by a tribe of Sioux Indians, a cut-off group of soldiers must resort to a depraved act for survival that sets off a chain reaction rooted in magic and myth. What I liked here was the unorthodox approach, interspersing the regular syntax of story with the journals and testimony of dead men.

And now we come to present day Tucker’s Grove … and a dying man impaled like a scarecrow on Elspeth’s Sandsbury’s farm. After discovering an altar devoted to dark gods, Elspeth sets about ensuring her crop yield is perpetually bountiful by making the obligatory blood sacrifices. Only her rituals aren’t quite what the Old Ones desire, and it will take a wayward traveller to educate her on the true meaning of what appeases them. More reminiscent of traditional horror in the market today, Church Services takes the familiar, the ordinary – and paints it black.

Though not every story presented in Tucker’s Grove, there are just enough slices here to give one a signpost of what to expect. As someone who grew up in small-town Wisconsin, this is Kevin Anderson tapping into a kind of homage … paying respect to those stories that kept him awake (and sane), during a childhood halfway between Norman Rockwell and Norman Bates. While some of the syntax can be juvenile (and the stories laid out more at home between the pages of bygone pulp), we still get a seldom-seen glimpse of someone honing their skills, chipping away at the bedrock, and mastering a talent which would eventually give rise to one of the most gifted authors working today.