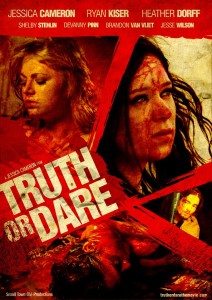 Director/Scream Queen Jessica Cameron’s new horror film, Truth or Dare has won 5 awards including two for “Best Feature.” The world premiere screening of Truth or Dare took place at the Arizona Film Festival where it won the “Best Horror Film” honor. Cameron’s twisted horror tale then headed to Las Vegas where it won “Favorite Film” and “Best Woman Director” at the Pollygrind Film Festival. Halloween saw the Utah premiere at the Salty Horror International where it took home “Best Special FX Makeup” for the work of Carrie Mercado.

Here is what some of the fans are saying about the film:

“Jessica Cameron and Jonathan Higgins have written and developed a film which in MY opinion has re-set the bar as far as indie, hell even mainstream horror goes for the years to come.” – Don Pettit

“This movie was one of those experiences that I found truly amazing to watch. The actors and actresses in this movie displayed so much raw talent. True creators of the craft.” – Andreaviera3

“I questioned the mind of the writers. What kind of sick depraved mind could come up with this stuff? The BEST minds I’d say.” – divainhopkins1959

Truth or Dare can next be seen at the first annual R.I.P Horror Film Fest in Long Beach, CA. It screens on November 9th at 8:30pm at California State University located at 1250 Bellflower Blvd.

The plot of the film revolves around 6 friends who find internet stardom when they make “truth or dare” videos online. It is all fun and games until their number one fan decides he wants to play. Nothing is what it seems, and everyone has something to hide…

The red band trailer for the film can be seen here: www.truthordarethemovie.com

Cameron produced and co-wrote the film with Jonathan Higgins.

Truth or Dare has screened at the Twin Cities Film Festival in St. Louis Park, MN and the Razor Reel Fantastic Film Festival in Bruges, Belgium. Below you will find a list of upcoming screenings:

When asked about the California premiere of Truth or Dare, Cameron responded with:

“I’m so excited to premiere Truth or Dare in Los Angeles since I and most of my cast and crew live here. It’s great to bring my twisted tale home. So many of our friends are the most devout horror fans and I am excited to get their thoughts.”

“I am loving how audiences are responding to our movie and am very much looking forward to what the L.A. film community is going to think of Truth or Dare.”

The first 100 in attendance at the R.I.P. Horror Film Festival will get their very own “Truth or Dare Vomit Bag” with Halloween candies inside!

WARNING: Truth or Dare is an intense, violent, and graphic horror film. Although it is not rated, the film is not recommended for people aged 17 and under.

For more information on Truth or Dare, please check out the links below: