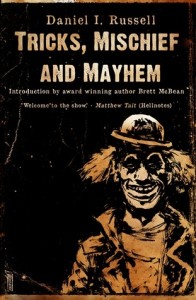 Over the years – in what I think is a natural evolution – this reviewer has become somewhat cynical a propos to the short story in the horror genre. ‘A quick kiss in the dark by a stranger’ Stephen King once described them – and although that is a fitting metaphor, I’ve always found their somewhat cryptic nature to be a hindrance to a rewarding experience. More often than not, a reader will go in completely cold, for there is seldom an accompanying description or blurb beyond a vague, only hinted at theme or illustration. Not only that, but their overall incoherence has caused me to routinely abandon plenty of them. Quotable prose and syntax notwithstanding, there have been many occasions where I’ve come away from the last sentence of a short story only to think: what the hell just happened in that story? And: Did any of that actually make a lick of sense?

Of course, there are many exceptions to the rule – and one writer I will always make time for is Australian author Daniel I Russell. After consistently proving he knows the formula for coherence over the extended length of a story, Daniel has finally accumulated together all in one volume the ‘bridgework’ stories that have catapulted him to where he sits now … as an industrious workhorse in the field of horror and an individual who cares about all facets of the genre. Initially, this was a compilation I received in a protracted Word document – and although I enjoyed such ‘kisses in the dark’ within this format, I ultimately wanted the full experience of the published book – not only the heft and weight of its physical binding but the added extras of an introduction by Brett McBean and compelling end-notes on each story’s genesis by the author.

By the Banks of the Nabarra

A domestic tale revolving around the Australian ‘Bunyip’ – a mythological creature from Aboriginal folklore whose environs include billabongs, creeks, and waterholes. Here, an isolated rural family is terrorized by a stepfather patriarch. Fed up, the mother hatches a plan to dispose of the miscreant once and for all. But her plans are waylaid with the introduction of a beast who resides in the nearby lake.

Narratively speaking, this is a very straightforward horror premise … but it’s ultimately made entertaining by the domestic component and Daniel tackling his first home grown Australian monster. One of the openers, By the Banks of Nabarra is characteristic of what lies in store for the reader: heavy, realistic dialogue and descriptive ‘gross-out’ horror that goes right for the jugular.

First person narration of romance that goes horribly awry. After her first husband walked out, lonely single mother Agnes has finally worked up the courage to ask a co-worker to her home for dinner. But first he has to meet her son … a disproportional creature with unconventional appetites. What I liked here was the miniature in images – descriptions that are unexpected but don’t break a stories spell or give us a mini-lecture:

My house sits on top. When I drive up and see it there all alone, I always think it’s been naughty and sent to sit in the corner, away from all the cookie-cutter houses that like to behave.

It Comes But Once a Year

A somewhat Christmas story featuring a character from Daniel’s early novel Samhane. In his notes, the author talks about composing an ‘ejaculation story.’ Although I consider myself well versed in horror sub-genres and grew up reading Richard Laymon, I will admit to a certain non-exposure in this particular category. As you can imagine, the story features Christmas lights … but comes with a side-dish of monsters, mayhem and seminal fluid.

Another domestic tale … this one actually reminded me a little of Stephen King’s The Last Rung on the Ladder – at least in terms of the voice. Here, a zombie apocalypse has arrived, but the dead are merely background static to a couples isolation, depression, and misgivings. In a claustrophobic apartment, a baby that won’t stop crying is just more white noise, forcing our mother to be backed into a corner … or perhaps a balcony. Broken Bough is the perfect example of heart contained within horror.

My personal favorite and one that was composed for a short story slot (and set in the same universe) as Brett McBean’s jungle trilogy. It’s a miscellaneous cast – with our narrator being a New Yorker of middle-eastern decent in a tropical rain forest apocalypse. Sequestered on an island with a motley crew of varied misfits, it isn’t long before a Lord of the Flies mentality slips in … and again I was reminded of King (in this instance The Mist), where a character with unstoppable charisma latches onto the good book and exploits it. As sides are chosen and division sets in, the value of belief will be learned for narrator and reader alike.

This is just a small snippet of the twenty-two tales contained within Tricks, Mischief and Mayhem – a vast funhouse of a collection encompassing everything from B grade horror schlock (Fluffs), to World War 2 melodrama (A Picture Tells and Following Orders). Of the cryptic nature I spoke of earlier, I will admit to finding some of that here, and occasionally I struggled to find a linear map contained within the story. All told, however, every positive facet of Daniel’s writing is put on display – chief among them the ring of exactness and truth he can give to dialogue. Above all, the short stories here represent a capstone to a segment of Daniel’s career … each tale a snapshot of time from the life of a writer whose greatest work is yet to come.