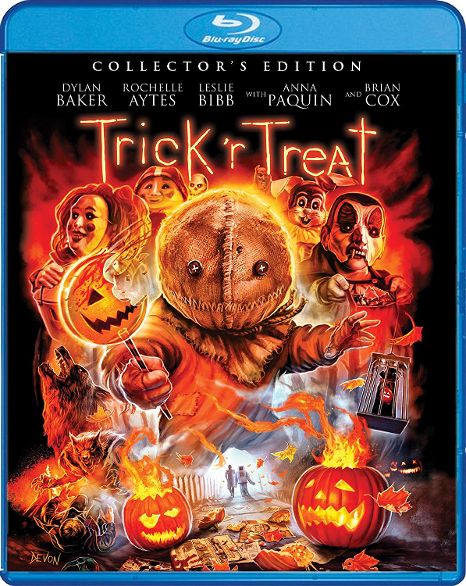 It’s the 2007 Halloween masterpiece that Warner Brothers dropped the ball on, big time. Instead of releasing it to theaters like originally planned, they quietly crapped it out on video with no fanfare or support whatsoever and quickly walked away from it. In time this movie finally found its audience and has become recognized as one of the best horror anthologies ever released, sharing the top spots in people’s Best Of lists next to the likes of Creepshow and Tales from the Crypt, and rightfully so. Since then, writer and director Michael Dougherty has gone one to do the wonderful Krampus, he’s just finished up Godzilla: King of the Monsters (fingers crossed that it is better than the first one), and it is rumored that Trick ‘r Treat 2 is now in the works. So it’s about time the first movie get the love and Special Edition treatment it deserves. So how does horror master Scream Factory handle it? Well, put on your mask, grab your biggest bag for candy, and let’s find out.

This is a collection of short stories all set in small town USA, being told in a nonlinear fashion and with plenty of threads interweaving and connecting them all. To successfully pull that off, which this film does, had to be a major pain in the butt, but the end result was worth it. What you get is one of the most cohesive anthologies ever made. Add to that the most Halloween-feeling film, ever. Yes, it’s far more Halloween that the movie Halloween. It’s got the look, the smell, the feel, the sounds, and the taste of the holiday. It’s a mix of creepy and corny, scary and silly, frightening and fun. That all-important mix is something many horror movies set on this night often forget to do. Then, on top of everything else, add an adorable, mischievous, mysterious, threatening, and iconic mascot like little Sam and I lose brain cells trying to figure out how Warner Brothers had so little faith in this film.

Well, what about the stories? They are all great. Each and every one of them, a rarity in anthology movies. Chances are you’ve seen this film already. If not, you so have to, right away, and I don’t want to spoil anything for you, so I’m not. I’ll just say that each tale collected here is expertly written and directed by Dougherty and well-acted by an impressive ensemble cast. They all are a cool mix of scary, sexy, gory, and funny, but for the record, my absolute favorite is the one about the school bus. While the whole movie is excellent, that one always gives me the chills.

Okay, let’s get to those delicious treats that Scream Factory has given us on this new Blu-ray release. First and foremost there is a director’s audio commentary with Michael Dougherty. There is a making-of featurette that is 19 minutes long, another one on the animated short that inspired the film that runs 16 minutes, and another featurette on the music for the movie that’s just over 11 minutes in length. There is a short feature about the release of the movie and all the problems this movie had with that, and that is seven and a half minutes. There is a half hour look at the traditions and history of Halloween, and a special split screen comparison of the school bus scene with and without visual effects that’s just over a minute long. There is a collection of additional, deleted scenes with optional director’s commentary, a gallery of storyboard and conceptual art, a behind-the-scenes still gallery, and a comic book gallery. There is a collection of 10 music video-like shorts that were made for Fear.net when that was still a thing and a theatrical trailer. Last but in no way least there is the original animated short that inspired the feature, complete with optional commentary by Michael Dougherty.

Trick ‘r Treat is a great and fun-as-hell movie that is a mandatory must-have for any horror fan and a must, must, must watch in October for Halloween. It is part of my yearly tradition for the holiday and it should be part of yours too. I can recommend this one beyond highly; I absolutely love it and this new Scream Factory edition is the best version of the film out there. Get it.