Tortures of the Damned – Book Review 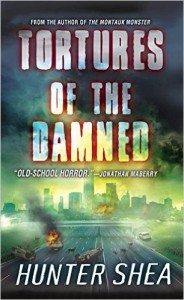 Hunter Shea proves again why he is one of the sharpest and most versatile authors of horror fiction today with Tortures of the Damned. The novel is one of the post-apocalypse, or more accurate, the unfolding apocalypse that deals with life on a more street-level basis, or more potentially realistic. The main problems are that of keeping family together, finding food and shelter and opportunistic criminals. The only element of the fantastic is the way animals have reacted to the fall of society, becoming more predatory, cunning and aggressive.

Daniel and Elizabeth Padilla live in suburbia, an average family in an average neighborhood. Their neighbors are Buck and his girlfriend. The characters compliment each other well, especially the parents to their children. The Padillas watch, throughout the duration of the story, the maturation and development of their children, Rey, Miguel, Max and Gabby, into strong people forced into adulthood too soon. There are some smaller characters who only pop up in short roles and don’t add much to the story, though they never detract from it. A street gang using the fall of society’s structure, the Nine Judges, is written well, treating the gang as one character with individuals as personality traits of the whole.

The novel jumps into action very quickly as mysterious explosions rock the outskirts the city. No one has any idea of what could have happened or why. Daniel, a darker-skinned American of Latin origins, finds himself hoping that the event isn’t terror related, mainly due to the fact that he was a target of anti-Middle Eastern harassment after 9/11, his actual heritage be damned. The Padilla’s neighbor Buck springs to action with a plan for survival, at least in the short term. Buck has a strongly outfitted bomb shelter under his house that he’s told nobody but his live-in girlfriend about and he has stocked it with enough resources for he and his partner and the Padilla family.

The first act of the novel is set almost entirely in the bunker below Buck’s house, and while the limited setting could become a drag on the story it never does. The story is driven entirely by the characters and the situations they face locked in a room together for weeks. The story does work its way out of the shelter into the city streets and concerns the remainder of its content with the survivors’ interactions with the newly forged threats. First up is finding food and shelter, second is combatting the mysteriously aggressive animals and third is the human element. The Nine Judges gang provides the greatest threat of all in this story of societal downfall, making a commentary on how humans will probably always be their own worst enemy.

The lack of zombies, vampires, aliens or other fantastical beings is really what makes this novel such a stand-out in a crowded subgenre. Shea gets down to the business of people being people, no matter what the situation, and does not shy away from social commentary, especially through a climactic battle that would fit nicely in the world of filmmaker George A. Romero.