To the Devil, A Daughter – Book Review 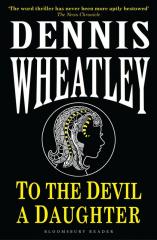 To the Devil, A Daughter

Long before William Peter Blatty’s THE EXORCIST ushered in a new-found fascination with the Devil, Satanism, and all things occult in the 1970s, Dennis Wheatley was penning occult thrillers that attracted readers by titillating them with tales of Satanic cults committing unspeakable acts in service of the Devil.  TO THE DEVIL, A DAUGHTER is one of Wheatley’s “Black Magic” novels (one of eleven out of his 60+ novels) recently reprinted by Bloomsbury.  Though it doesn’t involve any of the protagonists of his earlier Black Magic novel (THE DEVIL RIDES OUT), TO THE DEVIL, A DAUGHTER is explicitly set in the same setting, with some of the events of RIDES OUT briefly alluded to in DAUGHTER.

The story opens simply enough with Molly Fountain, a mystery novelist who had served as a secretary in British intelligence circles during the war, wondering who her mysterious new neighbor is.  Fountain is renting a house in the French Riviera while she writes her latest manuscript when a young woman moves in next door.  The young woman lives alone, never receives visitors, and wanders around outside at night, which seems innocent enough, but this attracts Fountain’s interest.  After introducing herself to the young woman, Fountain learns that the young woman is far more mysterious than she initially appears: she is living under an assumed name and has been sent to France by her distant father and ordered to remain in hiding there until after her upcoming birthday.  Fountain is an inveterate meddler who can’t leave well enough alone, so she arranges for her university student son John and an old friend who still works for British intelligence, Colonel Verney, to come for a visit and help her get to the bottom of the mystery.  As it turns out, Fountain needs all the help she can get when it becomes apparent that the young woman is being sought by a Satanic cult with whom her father had formerly been involved and is at the center of a truly disturbing plot (which I don’t want to spoil).  What follows is a desperate race across France and England to protect the girl and then retrieve her once she falls into the hands of the villains before she can be sacrificed.

Wheatley was known to have done a good bit of research on the occult and magical practitioners in the course of his writing career, and it’s known that he carried on correspondence with Aleister Crowley, among others.  Not to spoil anything, but Crowley and some of his past enter the story here through some lengthy expository passages.  As with previous Black Magic novels, Wheatley makes no bones about it: magic and the Devil are real, and those who serve dark forces can freely call upon them for tangible aid.  Wheatley has received criticism over the years for inflicting his research on his readers, but I think including these passages on magic and the workings of its practitioners only adds to the story and the sense of verisimilitude that Wheatley tries to create in what might otherwise be a run-of-the-mill pulpish thriller.

Hammer Horror adapted this novel – very loosely – for film in a 1976 version starring Richard Widmark, Christopher Lee, Honor Blackman, and Natassja Kinski.  The plot of the film bears only the most superficial resemblance to the novel, and was excoriated by Wheatley, who deemed it obscene.  If you’re a fan of Hammer, or Christopher Lee, it’s worth watching nevertheless, it just doesn’t have much to do with the book, outside of dealing with roughly similar themes.

Recommended as a good entry point to Wheatley’s fiction (especially his Black Magic novels) and an entertaining read in its own right.  What could have been a stereotypical adventure novel from the early 1950s is, in Wheatley’s hands, a slow reveal of the plot pervaded by a genuine sense of menace.  The stakes are very real, the villains truly monstrous, and the heroes unafraid to use extreme measures to put an end to the scheme.