To Hell and Back: The Kane Hodder Story – Blu-ray Review 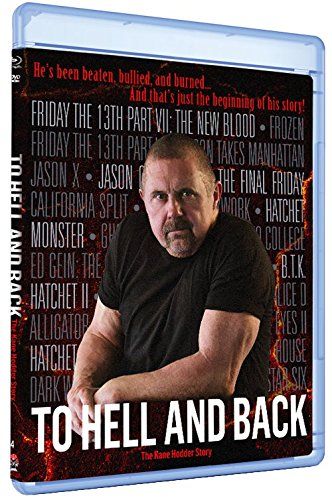 Kane Hodder is the man most people think of when they think of the legendary horror icon, Jason Voorhees, whether they know it or not. He’s the only actor to play the hockey-masked slasher more than once; he did so for an impressive four times. He’s also many people’s favorite Jason in the long-running series. For the record, for me that will always be The Final Chapter’s Ted White, but that is neither here or there. He embraced the role and more importantly: the fans like no one else. He’s been a flag-waving champion for the horror genre for decades but is he really interesting enough to warrant his own feature-length documentary? Well, let’s find out.

This movie looks at Kane starting as his childhood and a surprising fact: the man behind the mask was bullied as a child. Like, a lot. I would not have guessed that but good on the man for sharing his painful past. Oh, there’s more pain to come. A lot more. They we go into his young adulthood and his discovery of his love for movies and his decision to make films, in some way, his life. Then he becomes a stuntman and early on is his career he has an accident that almost ends his life. This is Kane’s infamous burning, but for the first time on film he tells the true story behind it. Up until now he had always been vague about it or outright lied and damn, it’s quite the story. And it only begins with the fire, then he went through one of the most grueling recovery I’ve ever heard of. It was so bad that it still visibly affects Kane, and hearing him talk about it had my wife in tears and I got to admit, had me welling up too. The fact that he came back from that, continued with his stuntman career, and most incredibility, went back to lighting himself on fire for a living, is just out-and-out amazing. Then there is what you’re expecting: his time as Jason Voorhees, his resentment at being passed over for the part in Freddy vs. Jason, his new misshapen murder machine, Victor Crowley in the Hatchet series, and many of the other movies and roles he’s done in his impressively long career.

To help tell this story there are clips of Kane’s many films, behind-the-scenes photos, and lots of interviews with a who’s who of the modern horror landscape. There are directors John Carl Buechler, Sean S. Cunningham, and Adam Green. Fellow actors/icons Bruce Campbell, Robert Englund, Sid Haig, Danielle Harris, Bill Moseley, Felissa Rose, and Cassandra (Elvira) Peterson. Then there are childhood friends of Kane, fellow stuntmen, and most importantly (again), the fans. All of them sharing anecdotes about Kane and singing his praises.

Let’s get to those extras on this new Blu-ray/DVD combo pack from Dread Central Presents. There are over 90 minutes of extra interviews and longer takes divided up into six categories: Bonus Bits, Bonus Burn Memories, A Kane Hodder Fight History, More Memories on Kane Hodder Films, Extra Comments of Friday the 13th Films, and Additional Thoughts on Hatchet Series. Added up all tighter and you’ve got a whole other documentary, so in a way it’s two for the price of one. Not bad.

If you are a fan of the man, Kane Hodder, a lover of insider stories on moviemaking, one of the many who believes Kane was the best Jason in the Friday the 13th series, someone who has followed Kane into other fright flicks like Hatchet, or just a horror fan in general, then you’re going to like this documentary. With that in mind I can recommend To Hell and Back: The Kane Hodder Story to anyone. Get it.