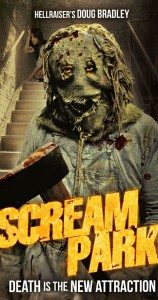 It’s closing night for the Fright Land scream park, but before the rickety gates are closed and the final plug is pulled, its ragtag group of teenage employee’s are just dying to throw an alcohol themed (and sometimes topless) rumpus. They want to send their mundane, and probably seasonal jobs off in a blaze of glory.

The parks owner, Mr. Hyde (played by Hellraiser‘s Doug Bradley) isn’t willing to let go of the second generation, and one time cash cow so easily. If only he could find a way to bring interest back to the aging park, it could be the way it was all of those years ago when his father ran it. Mr. Hyde becomes determined to make money, hand over bloody fist again, and at any cost.

After racking his brain, an idea goes off in the dimming light bulb above his head. He feels that a slue of horrific murders will get people talking again, maybe even enough to stir back up some big bushiness, after all nothing sells tickets like death, even if it means the snuffing out of some young, but not so innocent lives.

Not long after the partying begins, and the park has been locked down, two large masked men mysteriously appear, causing murder, death and chaos to the no longer gung-ho teenagers who aren’t just stumbling through the park, but their low paying roles as well.

Every performance isn’t stilted, but a solid one is harder to find than a firm stool in the bathroom of a restaurant that only serves spicy chili. This film seems to be running off the wrong end of the rails from its opening scene. Though the concept is strong, the movie relies on tired, rehashed, and exhausted themes that made this viewing occasionally tedious.

Scream Park really tries to deliver, and it’s obvious that its writer and director Cary Hill has a lot of talent. The cinematography and art direction is seemingly without fault. This slick looking film suffers under the confines of a $40,000 dollar budget. One wonders what would have happened if Mr. Hill had had a little more money to play with, and was aloud to spread his wings a little further. Fortunately we will have a chance to find out with the upcoming $250,000 dollar sequel, Return to Scream Park!