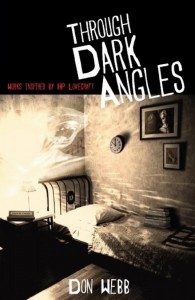 Although the book is a collection work inspired by Lovecraft (it is in the title), some of the stories are subtle in their influence. “The Megalith Plague” about a disgraced doctor returning to his ancestral home sounds like it could be a cliché but Webb moves the setting to backwaters of central Texas, starts off with a noir vibe, and then runs amok.

The nods to the Old Gent of Providence serve as both homage and nods to Webb’s familiarity with Lovecraft’s life. “The Man Who Scared Lovecraft” builds off HPL’s revision work. Lovecraft’s genealogical interests launches “The Doom That Came to Devil’s Reef,” a sequel of “The Shadow over Innsmouth” of sorts, but not really. Protégé turned literary executor Robert Barlow appears in “The Codex” with anthropology student William S. Burroughs (Burroughs did take a class taught by Barlow in Mexico), and Herbert West, re-animator meets his equal in the alchemist/sorcerer Cagliostro in “Slowness.” This is not Derlethian pastiche. This is Webb grasping the Lovecraft concepts and remolding them into his own mix of black humor, hideous demises, and things best not known by man.

The most fun piece in the book is “Casting Call” about an actor who wants a role on Rod Serling’s Night Gallery so desperately that when the show is casting an adaptation of “Pickman’s Model” (which actually was part of the series in 1971), he uses make-up from a small book that has been pinched from Forrest Ackerman. How can you possibly go wrong with Rod Serling and the Ackermansion in the same story?

Webb’s collection consists of 24 stories and poems, 13 of which have been published previously; half of those are fairly recent and the remainder date back to the mid-90s and one as far back as 1985. This is of note because, in the course of stories covering a span of 30 year, Webb remains true to his interpretation of the cosmic dystopia created by Lovecraft.