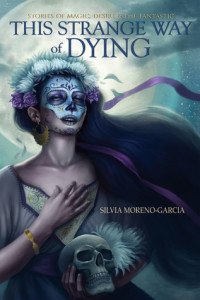 This Strange Way of Dying

In her collection of stories, This Strange Way of Dying, Canadian-based author Silvia Moreno-Garcia plumbs the rich depths of her Mexican homeland, the setting for all but one of the stories.  These stories are subtitled “Stories of Magic, Desire, and the Fantastic,” and this is certainly apt, as they are reminiscent of works by Gabriel Garcia Marquez, Laura Esquivel, and other Latin American Magical Realists.  Although these stories contain the standards of horror fiction—zombies, vampires, aliens, shape-shifters, doppelgängers, and witches—Moreno-Garcia elevates them above the cliché. For example, in “Stories with Happy Endings,” her vampire is a jaded resident of Mexico City, whose late night meeting with a reporter, a meeting which brings to mind An Interview with the Vampire, raises the question of who is the most vampiric—this rather sad character who works in a factory or the reporter herself, living off the stories of others. Moreno-Garcia’s twist on the doppelgänger is also unusual, centering on a normal child with bohemian parents who—after thinking it would be great if her parents were a bit more stable—starts seeing a more conservatively dressed and respectable version of her parents.  Although like many of the stories in this collection the ending of “The Doppelgängers” is left open, there is the possibility that what is wished for is not always better than what was there before.

Moreno-Garcia makes use of the whole of Mexican history, setting stories in eras starting at the Pre-Columbian and ending with a future vision of Tijuana as a base for aliens. Her brilliant descriptions convey the mysticism of the native mythology, the sorrow and desperation of the conquered, and the excitement of the Revolution (with zombies!). Even though the stories differ in plot, characters, and settings, they are all connected by a sense of strangeness that runs throughout. Moreno-Garcia has captured the essence of Mexico—its multi-layered culture, its curses and brujeria, its mixture of Christian and pre-Christian religious beliefs, and even its colorful plants and animals.

Those who like horror shallow and visceral will probably not like this collection.  Although there is gore and violence in some of the stories, Moreno-Garcia, even at her most violent, has a more subtle touch.  “Flash Frame,” a story that reminded me a bit of Ramsey Campbell’s Ancient Images, is truly frightening and will cause readers to see the color yellow in a different and terrifying way. However, many of the stories are more beautifully haunting than viscerally scary.  Some are sad.  Some are even funny.  All of them will stay with the reader long after the collection is finished. These expertly-written stories transcend genre and would be appealing to readers who do not like in-your-face horror but do like weird tales as well as to readers who like depth to their horror.  I highly recommend this collection and hope that Moreno-Garcia publishes another book very soon.