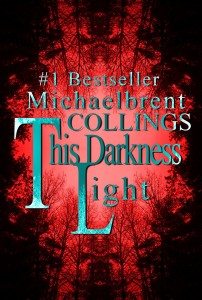 In a time of a (real-life) global pandemic of a hemorrhagic fever that has been propagated by international air travel, it’s a powerful opening to begin a novel with an outbreak of some terrible new disease killing the passengers of a jetliner.  And that’s just the opening scene.  I have to admit that initially I wasn’t sure how to classify Michaelbrent Collings’ latest: is it a techno-thriller?  Some kind of zombie apocalypse novel?  Now that I’ve read it, I can say that it includes a bit of all of those elements to produce an entertaining supernatural thriller.

Good thrillers with overtones of supernatural horror require interesting characters, good and bad, to drive the narrative.  Here we have major characters who include: John Doe, an amnesiac who has survived multiple gunshot wounds to the chest with no lasting damage, and Serafina, a trauma nurse who is obviously in way over her head, as well as Isaiah, a murderous vigilante with a complicated past who has been set on their trail by blackmailers.  The villains – including a mysterious Mr. Dominic who seems to be one of those ruthless, power-behind-the-throne types and some savage henchmen he has on the payroll – are genuinely creepy and the good guys only slightly less so.

Like many of Collings’ novels, THIS DARKNESS LIGHT alternates between deadly, high-stakes action and a darkly humorous tone (interludes of email exchanges between the unnamed and increasingly unhinged President of the United States and an enigmatic figure calling himself X are especially entertaining).  That works well to periodically ease the tension before ratcheting it back up.

As with some of Collings’ other fiction I’ve read, you have to allow yourself to go along for the ride; Collings enjoys placing the reader in circumstances where it’s not entirely clear at first what is going on.  Things get strange, bordering on the surreal, as more supernatural elements are introduced, before they gradually clarify.  What begins as a simple “protagonists being hounded by the bad guys” crosscountry trek becomes something much more than that as the world around them descends into chaos.  We’re not talking about simple crime and disorder either, we’re talking about the nature of reality itself unwinding.  Now *that’s* a great setting for a thriller.

Collings, as usual, displays his knack for depicting fast-paced action sequences: there are some truly memorable gun battles and car chase scenes here.  It also contains some fairly gruesome violence and gore; if that’s your thing, you’ll be right at home here.  It’s also not just goons with guns; what begins in a fairly straight-forward sort of way becomes increasingly supernatural as the plot goes on.

THIS DARKNESS LIGHT is an engaging mix of thriller and apocalyptic horror novel, with religious elements.  It’s a very quick read and recommended for fans of occult, apocalyptic thrillers.