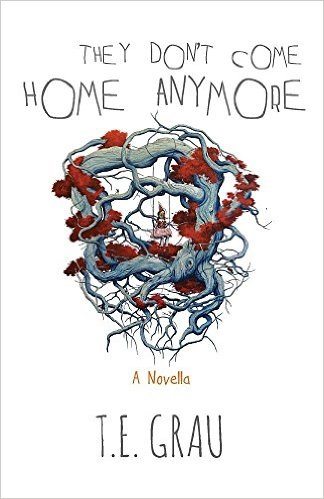 I had my first experience with the work of T. E. Grau earlier this year when I read his debut collection of contemporary weird fiction, The Nameless Dark. That book stands as one of the top five or six single-author collections I’ve read in the past two years and I’ve already re-read several of the stories in it. Grau’s voice is so well developed and unique, his stories are a joy to experience, albeit a dark sort of joy, and I was ecstatic when I saw that he had applied his considerable talents to a slightly longer form in his new novella, They Don’t Come Home Anymore.

In many ways, it’s much easier to get a good feel for an author from their shorter works than from novel-length material and it’s the way I prefer to experience authors I’m unfamiliar with. It gives you a chance to take a quick sample and see whether the work they’re doing is right for you and if it’s something you’ll enjoy. It’s also a chance to get a quick inside look at the author, see what flavor of fiction they’re producing and whether it meets your particular taste. In T. E. Grau’s debut collection, a couple of things were readily evident. One, he’s an author to be reckoned with, and one who you’ll likely be hearing a lot about in coming years. Secondly, while he’s most often categorized as an author of weird, cosmic horror, it is to some degree an inaccurate interpretation of what he’s doing. What he’s really doing is taking that as a jumping off point and diving into his own dark pool, creating new directions and new paradigms that take his fiction to a place that’s all his own. And They Don’t Come Home Anymore, his newest work from This Is Horror, is further proof that it’s a place you want to visit. Frequently.

They Don’t Come Home Anymore is the story of Hettie, a teenage girl bent on saving her best friend Avery from the terminal cancer that is killing her. So determined is she that she’s willing to take the darkest, most drastic measures imaginable to accomplish what seems on the surface to be such an impossible feat. For what the living can’t achieve, death may be more than well-equipped to provide. I could go on talking about the plot and storyline for pages and pages, but I’m going to stop right there. There are some important reveals that would be super easy to spoil with just a word or two and I’m not going to run that risk. What I will tell you is that Grau has taken on an old trope and put the most unique twist on it I’ve ever seen.

While every good author has a comprehensive grasp on the elements of storytelling and how to apply them, it’s also true that they tend to have a particular strength, an element that defines their work and shapes their voice in a way that is attractive to the reader, that makes them want to keep on turning pages once they start a particular story. With T. E. Grau, I think that strength is setting. When I say setting, I’m not just talking about his ability to describe a location, though that’s important too. What I mean is that he has a remarkable knack for drawing the reader in and making them part of the scene, experiencing the mystery and the terror on a visceral level that helps to propel them into and through the story, anxious to learn the fate of the characters and the wholly unexpected turn of events that the tale takes over the long haul. He has an exceptional alacrity with character development, but an even greater grasp of visual display, never once resorting to pure exposition for the purpose of getting his story across, instead relying on vivid, Technicolor imagery and intense mood, something most readers and many authors fail to realize is as integral a part of setting as is the grass and the buildings and the dark places this novella takes us to.

I’ve had the opportunity recently to read some outstanding fiction with some of the strongest, most well-developed female leads that I’ve seen in recent years, and They Don’t Come Home Anymore continues that trend in exemplary fashion. Hettie is a fully formed independent female character with a mind of her own and a determination to achieve her goals regardless of who—or what—might attempt to deter her. She’s also a dark soul with a supercharged, overemphasized sense of loyalty to Avery and a willingness to sacrifice even the most precious of things in order to save her and, on a more selfish level, to have her to herself.

They Don’t Come Home Anymore brings together a cast of unique, quirky characters, gorgeous prose, and imagery, a spin on a familiar theme that literally makes it a brand new trope like nothing you’ve read before. It’s something he’s done with all his work but never with as much confidence and success as what he’s given us here. His debut collection made me want to follow him in his career and this new, intensely moving tale of suffering and potential redemption, he’s done nothing but reinforce that desire, cementing his place as one of our most promising new authors.