They Came From The Swamp: The Films of William Grefé – DVD Review 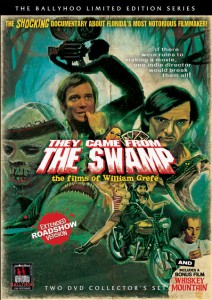 There are certain names associated with the wild and wooly days of Florida’s independent filmmaking in the 50s and 60s: David Friedman, Herschel Gordon Lewis, Doris Wishman, Brad Grinter – if you recognize these names, you know there is one missing: William Grefé. Before Blood Freak, Blood Feast, or Nude on the Moon, “Wild Bill” Grefé was grinding out low-budget exploitation films for drive-ins.

Director Daniel Griffith of Ballyhoo Motion Pictures has given Grefé a long overdue retrospect of his career in They Came From The Swamp, not so much a documentary as a 126-minute love letter to Bill Grefé and his work. With interviews and footage, we revisit the glory days of exploitation and low budget films. In the case of Racing Fever (1964), Grefé purchased amateur footage of a fatal speedboat to use in the film, saving a fortunate in recreating such an accident as a stunt.

But it was in low-budget horror that Grefé truly left his mark.  Sting of Death (1965) with a human/jelly fish hybrid terrorizing coeds, Death Curse of Tartu (1966) with a college archaeology field trip disturbing the sleep if a mummified witch doctor, Stanley (1972) with a ‘Nam vet battling local corruptions with his pet rattlesnake, and Mako: The Jaws of Death (1976) with a loner who has a grudge and the ability to communicate with sharks.

And then there’s Impulse (1974), with William Shatner as a sociopathic, leisure-suit-wearing, gigolo who bilks women of their fortunes before killing them. The backstage stories are almost as legendary as the film, with stories like Shatner supposed hanging Harold Sakata, only to realize the stunt rig had failed and Sakata was actually strangling. Shatner grabbed Sakata and held him aloft until the crew realized they weren’t improvising.

Disc One is the documentary, plus a series of outtakes from interviews with Grefé and cast members about working the early days of Florida film. There’s a history of Crown International Pictures, the distribution company that made the indie film scene possible.

Disc Two features two vintage Grefé short films, including one starring a swashbuckling Shatner in a promotional piece for Bacardi rum and an assortment of trailers and production stills. Most notable is the inclusion of Grefé’s hicksploitation classic Whiskey Mountain (1977), its first release in widescreen.

Combined, there are over three hours of bonus features for a two-hour documentary. Even if you have limited interest in land-walking jellyfish or Shatner in a leisure suit, director Daniel Griffith has created a testament to the work of William Grefé that  also services as an invaluable record of a nearly forgotten Florida industry that was more avocational than profitable.