The World on Fire – Book Review 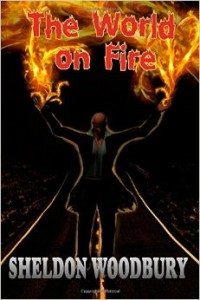 Louis Sedah, a.k.a. the Angel of Death, turns himself in after months of murder and arson. He is sentenced to death and is waiting his sentence on Death Row in a Colorado maximum security prison. He is about to grant an interview to David Milton, a troubled and disgraced reporter whose occupational slide went from the New York Times all the way down to the  National Enquirer. Milton is hoping an interview with The Angel of Death will revive his career. Yet once the interview starts, all hell breaks loose.

Sheldon Woodbury’s nasty little escapade titled The World on Fire is one of those books that evokes more cinematic references than literary ones. Think Natural Born Killers meets The Devil’s Rejects meets Con Air. Yet Woodbury’s harrowing hell ride works well on paper as his group of the worst murderers on the planet, with hostage reporter and blonde bombshell groupie in tow, escape and indulge in the most terrible terrorist acts imaginable. It is very violent, a riveting roller coaster ride and, maybe, just maybe, there is some kind of post-apocalyptic social message of the subversive kind creeping around in all that fun and gore.

Woodbury’s pièce de résistance is Louis Sedah, a bigger than life monster whose abilities and charisma trumps his other less than human qualities. The author never lets us forget that Louis is relentless and merciless. As he and the seven criminal fugitives roam the country we find that his reach seems even more far reaching than we suspected. A character like Sedah runs the risk of becoming too unreal and unchecked in that the reader loses any semblance of reality and balance to the point that the protagonist becomes easy to dismiss. Yet we also have David Milton, a man with his own burdens but still precariously able to keep his foot grounded in humanity. It is a nice balancing act. At some times, I wish Milton plays a more balancing role in this novel. He is essentially the hostage with little power and no control over the events yet his presence gives us an eyewitness with a conscience on the actions of madmen. We also find out that Sedah keeps Milton around as part of his plan. What that plan is becomes the payoff of this novel. There is also the obligatory lawman hell bent on capturing Louis yet, while his purpose to exist becomes clear at the end, he seems like a bit of a detour. The real meat of the plot lies with Louis and his entourage.

I liked this novel. It flows like a weasel on fire, staying one step ahead of the reader and starting little fires as it darts in and out of the chaos. Woodbury has a smooth assured style that easily goes from one characters’ perspective to another without disturbing the narration. He tells a story with panache yet knows how not to give too much away too quickly. It’s pretty much all you can ask for a debut novel and bodes well for a writer who knows how to keep you attention and scare the hell out of you. If you are looking something that reads like a grindhouse movie but also want something that kicks literary butt at the same time, you will probably like The World of Fire and the Angel of Death’s hellish alternate reality.