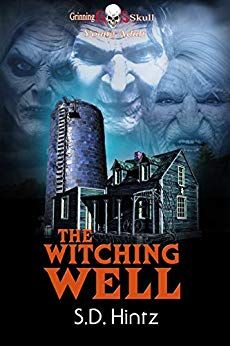 Here’s a horror novel aimed specifically at the young adult (YA) market. The Witching Well by S.D. Hintz and published by Grinning Skull Press, is a pleasure to read! The powerful cover art grabs your attention and the magnetic story pulls you in and doesn’t let go until the fiery finale. Let’s take a peek inside!

Murray Macabe has just gone through the horrible trauma of having his mother murdered. Since she was a single parent, Murray is suddenly homeless and alone. Fortunately, his Grandma Anna takes him in, but not without complications. She tries to portray the town of Windom as a sleepy, All-American kind of place that’s full of flower gardens and sunshine. However, it doesn’t take Murray long to see that there’s a whole different side of this town and it has teeth.

For one thing, he’s the only kid in town. If that’s not strange enough, his Grandma’s creepy neighbors watch every move he makes. Murray’s not sure how to take this unwanted attention. One minute, it appears that a cluster of old women want him to be on the next bus out of town. But the next, they seem hell bent on keeping him right where he is. Murray tries to duck under their radar, but it’s impossible as the ladies amp up the attacks. When he tries approaching his grandmother about these odd doings, she scoffs and tells Murray that he has an overactive imagination. Plus, she’s got secrets of her own to keep quiet, so the last thing she wants to do is go around ruffling feathers.

Luckily, Murray finds an unlikely ally in Cab, an older black man who goes to church regularly and possesses a lot more pep than his looks show. He and Murray are fellow outcasts because of who they are and what they’re not. Being unique in a closed town like Window is not healthy. Especially with a creepy undertaker who seems to enjoy driving his hearse around and making cryptic comments to people. Will Cab and Murray share the fate of many endangered species, or will good prevail over evil? Only one way to find out! So grab a copy of The Witching Well by S.D. Hintz today and get reading!

I enjoyed reading this novel and give it 4 Stars! Lots of fast action, suspense, and a new surprises around every corner. Witches, small town isolation, friendship, and doing the right thing no matter what, are all themes in this book. I kind of wish that the book was a little longer and more detailed. But overall, it was a great read. I look forward to seeing what’s next from Grinning Skull Press and S.D. Hintz in the near future!