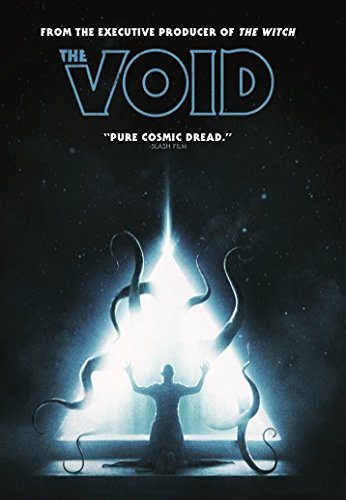 When I heard of The Void, it was being described as a love letter to H.P. Lovecraft’s brand of cosmic horror, with visuals and style right out of a John Carpenter film, a pinch of Hellraiser tossed in for good measure, and glorious, mind-blowing practical special effects. So yeah, there was only a very slim chance I wasn’t going to love this movie if it could deliver on all that. So did this film deliver, or was it another in a long line of over-hyped disappointments? Let’s find out.

The Void begins with two men raiding a house out in the woods, shooting folks, and then for good measure, lighting them on fire. Yeah, that will get your attention. We then jump to a cop seeing someone wandering a lonely road, hurt and bloody. He takes the wounded man to the nearby hospital that, unlike other hospitals in horror movies, actually has a very good reason for being almost completely deserted. Not only that, but that reason is a plot point and one that comes back in a big way later on in the film. Wow, imagine that!

Once at the skeleton-staffed hospital, things get strange, fast. Nurses become homicidal, and then turn far less (or more?) than human. The two well-armed killers from the start of the movie crash the party with more murder in mind. To make matters worse, a sheet-wearing, knife-wielding cult has surrounded this hospital to make sure those inside can’t escape the fun to come. In short order, monsters right out of John Carpenter’s The Thing start to wander the halls, dead bodies go missing, an expedition to the hospital’s burnt basement is put into motion, and reality itself starts to warp. And it is this last aspect of the weird I want to highlight briefly, because it is done so well and subtly that many viewers didn’t pick up on it. There are some things here that don’t make sense, and I have heard some of my fellow reviewers say “that didn’t make sense” as if that was a mark against the movie, but they totally missed the point. Such rubber reality was done on purpose, even if the filmmakers wisely didn’t shine a glaring spotlight on the altered elements. That wonderful weirdness, something that is missing in a lot of films these days, only adds to the dread and uneasiness of the film. If only all reported homages to H.P. Lovecraft were this smart and well done, then the world would be a much better place.

And yes, you lovers of Lovecraft out there, this movie gets cosmic horror right. There isn’t just tentacles, indescribable monsters, and unpronounceable words. Oh, don’t get me wrong, it has all that in here, but it has more than just that. This film feels strange, huge, unknowable, and threatening. If you think the weird world Lovecraft helped give birth to is more than just the pop culture-appropriated image of Cthulhu, then you really need to see The Void.

This is also a film that benefits from repeat viewings. The first time I watched it I was blown away by the spectacle of it, the visuals, the nods and winks to past work I greatly admire, and yes, the killer creature effects. Watching it a second time for this review, I got more of the story elements, and saw how this movie could stand on its own, outside of the very long and dark shadows cast by the heroes it so devotedly worshiped.

Now it should be said that The Void is a very small, low-budget movie, partially funded via Indiegogo to the tune of $82,510. And yet, you wouldn’t know that by watching it. It looks great, the cinematography is impressive, the John Carpenter feel they were going for is achieved without being out-and-out pastiche, and the much hyped creature effects are, in a word: amazing. This is a great example of what can be done when heart and skill combine for a clear passion project. If this movie has one stumbling block, it’s that some of the acting isn’t on the same level as the look of this movie. No one is really all that bad, but there are some that are just not as strong as others. But then, that can be said of most films.

On to the extras that Screen Media Films put on this new DVD release. Yes, I said DVD, and right there that’s a bit of a bummer. This movie was only released on DVD, and with its visuals, special effects, and cinematography, it begs for a Blu-ray release. But then that’s movie making, and releasing, on a micro budget, I guess. As for the special features, there is a very good audio commentary track featuring both writers/directors: Jeremy Gillespie, Steven Kostanski. There is also a teaser and a trailer. And that’s it. Well I can’t say I am overly impressed with the goodies here, so let’s move on quickly.

The Void is an excellent film. The DVD release of it, not so much. It’s not technically bad, I have seen worse, including some big budget movies from some of the big studios, but this movie deserves so much more. Maybe in a few years when its cult-like following has grown it will get the Blu-ray release with all the bells and whistles that it should have. But as for now, today, this is the only game in town, so can I recommend it? Yes, unequivocally so. Based on the strength of the film alone, the only thing that ever really matters, this is a must-have for fans of H.P. Lovecraft, John Carpenter, cosmic horror, weird fiction, and practical special effects. Consider it highly recommended.