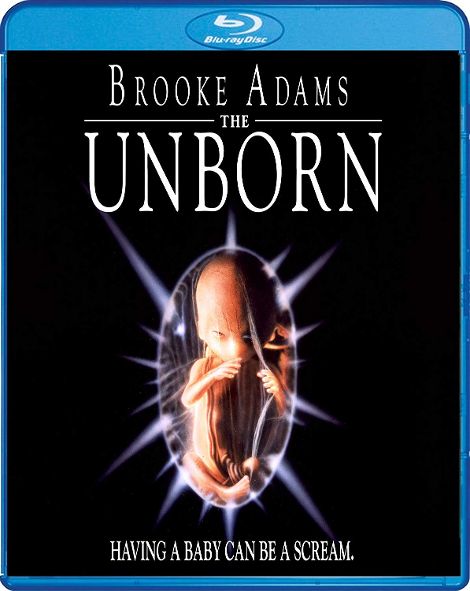 This is the 1991 film starring Brooke Adams (horror fans will recognize her from Invasion of the Body Snatchers (1978) and The Dead Zone) and James Karen (Poltergeist, Return of the Living Dead I and II, and 1000 other films). This is not the piece of crap from 2009 where “Jumby wants to be born now.” So thank god for that, but is this one any good on its own merits? Well, I’ll tell you from the start it is a weird one. Tonally it switches from a serious horror thriller to “what the f*** am I watching?” But hey, I like both serious and WTF horror movies, so I’m game. If you are as well then come with me as we take a look at this new Blu-ray release from the always fine Scream Factory, The Unborn.

Brooke Adams plays Virginia. She and her hubby desperately want a child so they go to a new doctor who comes highly recommended for people having trouble conceiving. And lo and behold the doc’s scientific mojo works and soon the couple are parents-to-be. Everything is great…at first, then not so great. It starts with Virginia acting a little weird. You know, like subconsciously strangling the family cat, and getting a weird, pulsating rash on the side of her neck. Then she notices things are a little bit off with her friends who are also pregnant thanks to the good doctor. Subtle little things, like ramming a large kitchen knife into their big pregnant belly. Sensing that something just might be a touch off with her soon-to-be bundle of joy, Virginia starts doing some investigation and discovers that the doctor was kicked off the Human Genome Project for some problems with his ethics. Huh, imagine that.

Then Virginia has her baby and that’s where this gets scary. The scientific, serious thriller takes a hard left turn into It’s Alive territory. Yeah, things get really silly really fast, complete with a misshapen newborn on the run viciously killing people. Now some viewers may get whiplash from this sudden switch in tone, and I can see why, but me, I loved it. It’s the right amount of mixing strange with the slightly stupid that had me laughing out loud, and the swerve was so unexpected that the shock of it really worked for me. The ending is a little unresolved but overall, yeah I dug this one.

On to the extras and special features that Scream Factory put on this new Blu-ray release. There is an audio commentary with producer and director Rodman Flender and filmmaker Adam Simon. There is also a theatrical trailer. And that’s all. So this release is not exactly barebones, but this little baby could have used a little more love, I think. Still, it’s good to have this often-neglected and overlooked orphan in HD where it looks and sounds very good.

The Unborn is a surprisingly weird little movie with an inconsistent tone, but if you can get into the silly final reel of this film I think you might discover an overlooked gem. That’s how it was for me so I can highly recommend this one for fans of not-too-serious horror.