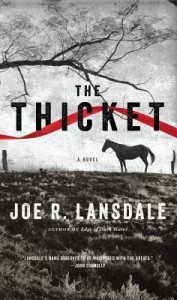 Ok, so this isn’t horror, but it’s Joe R. Lansdale!  How could I not post this?  Anyway, I hope you enjoy it.

The great Joe R. Lansdale (and I don’t use the term “great” lightly) is a multi-faceted author who can write in whatever genre he chooses.  This man was written novels in the Science Fiction field, the Fantasy, Horror, Drama, Suspense, Thriller, the Private Eye genre, and the Western.

I first got hooked on Joe when I read his fantastic novel, The Bottoms, back in 2002.  From that point on, I made it a mission in life to read everything by this man, who certainly knew what fabulous storytelling was all about and always delivered the goods to the reader.  This led me to Joe’s two Western novels, The Magic Wagon and Blood Dance.  I devoured each one in a single setting.  Joe’s two books turned me on to Western novels, and I soon found myself reading the Pulitzer Prize winner, Larry McMurtry and his eight-hundred-page door stop, Lonesome Dove, the novels of Louis L’Amore, Jack Ketchum’s The Crossing, the “Hitch/Cole” westerns by the late Robert Parker, and the soon-to-be-released, The Guns of Santa Sangre by Eric Red.

It was therefore natural for me to pick up a copy of Joe Lansdale’s The Thicket when it was finally published a few weeks ago.  The thing about Joe’s novels is that I already know I’m going to love them before they even arrive in the mail.  I’m like a little kid, jumping from foot to foot on Christmas Eve.  Getting a copy of Joe’s newest book inevitably brings a smile of pure joy to my face with the avid anticipation of a great adventure lying ahead.  All I have to do is open the book and turn to the first page.  It’s just that simple.  I don’t even have to leave the comfort of my apartment or the softness of my old couch.  I can curl up right there in the living room with the brightness of a lamp shining on the pages and disappear for hours at a time within Joe’s incredible stories.  It reminds me of when I was a kid and used to read the Tarzan and John Carter of Mars novels by Edgar Rice Burroughs.  It was the opportunity to be taken to another world and a different time, and to face the same dangers the hero encountered in his quest for justice and love.

The Thicket by Joe Lansdale is just such a novel.  You find yourself hooked in the first couple of pages, wanting to learn more as the young hero travels a path of death and destruction, seeking to rescue his kidnapped sister and to revenge the murder of his grandfather.

This is a story that starts off with Jack Parker and his younger sister, Lula, who are being taken to his aunt’s house by his grandfather.  Jack and Lula’s parents have just died from the smallpox, and the grandfather isn’t able to care for the two kids.  He wants to place them in a safe environment to live, until he can get everything set up to provide for them.  That opportunity, however, never arrives.  When crossing a river on a ferry, tragedy strikes in the forms of a river tornado and Mad Dog Bill.  Mad Dog Bill shoots Jack’s grandfather after some heated words, and then the river tornado capsizes the ferry, tossing the passengers and animals every which way along the banks of the Sabine River.

Jack Parker barely survives.  After he discovers the bank-robbing bandits have also made it through the ordeal and taken Lula with them to the opposite bank, Jack promises himself to find her and to bring his little sister back.

Making his way to the nearby town that just had its bank robbed and the sheriff killed, Jack discovers the names of the bandits that took his sister—Mad Dog Bill, Nigger Pete and Fatty Worth.  After a close encounter with the town’s people, Jack happens upon a giant of a black man named Eustace.  Eustace is a grave digger and has a large-sized hog following him around like a pet.  Eustace also has a friend named Shorty, who’s a dwarf bounty hunter, a reader of books, and a gazer of the stars.  Jack has his doubts about a dwarf bounty hunter helping him to save Lula.  The black grave digger, however, is a go.  The only problem is that Eustace won’t hunt down the bandits without the help of Shorty, so Jack has to agree to sign over the land deeds to his parent’s and grandfather’s farms to both of them, if they succeed in rescuing his younger sister.

The three of them, along with Hog, set out after the bandits.  When one of the bandits (Fatty) breaks off from the group and goes it alone, they decide to follow him, thinking he might be easier to capture by himself and have some useful information to offer about where the others are heading.

Jack, Shorty, Eustace, and the hog trail Fatty to a town with a quality whorehouse in it.  That’s where they meet up with Sheriff Winston, who was tortured by the Comanche and watched as his family was murdered.  It’s also where they meet Jimmie Sue, a young prostitute who’s tired of the life and wants to get away.  Both the sheriff and Jimmie Sue decide to tag along with the group for their own reasons, but mainly to help get Lula back to her brother.  Once Fatty is captured and pistol whipped by Shorty, who seems to have a special talent for those kinds of things, they find out that the bandits are headed to a part of North Texas where the Thicket is located.  This is a piece of terrain where a lot of desperadoes like to hide and kill the lawmen that come after them.  It’s not a good place to visit, and everyone is going to have their work cut out for them when they get there.

Few authors are capable of creating a story that’s filled with intense drama, action-packed suspense, violence and torture, and just plain good-old humor.  As Joe might say, reading this novel was more fun than getting beat in the face with a stick by an angry circus monkey.

During the first half of The Thicket, Jack Parker and the reader aren’t sure if they like Shorty or many of the other characters that trail along with them.  Joe Lansdale, however, has a unique way of explaining a character’s past that makes him or her both human and capable of so many good and bad things.  Most human beings are a conglomerate of numerous emotions that are portrayed when least expected.  Joe knows how to capture this and to turn his fictional characters into ones the readers truly care about.

Joe Lansdale certainly knows how to create an era that comes alive in all of its desolation and proclivity for sudden and violent death.  He makes the West at the turn of the century seem like the land it really was, sparse and bare; yet, filled with men who wouldn’t hesitate to kill you for even looking at them the wrong way.  Joe is also an author who does his research and gets the ingredients of the time period right on every level, making the time and its inhabitants burst out with a life of their own, drawing the reader into the story as if he or she is living it.

The Thicket by Joe R. Lansdale is one of the best novels of 2013.  It’s certainly a humorous story because Joe is unable to write anything that doesn’t reflect his East Texas sense of comedy as it relates to the folly of mankind.  Nobody can deny that reading a Lansdale novel is more entertaining than rolling down a hill with a bunch of armadillos.  That’s a Lansdale saying by the way.

My only wish is that Joe would write a sequel to The Thicket.  Though things were kind of wrapped up at the end, there’s still room for more stories about Shorty and Eustace.  I, for one, want to read them.