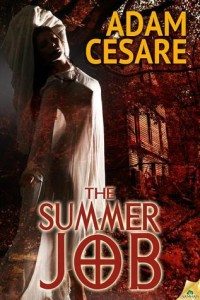 After re-inventing herself following high school—divesting herself of her nickname “Silverfish” and playing down her piercings and tattoos—Claire takes advantage of the situation to re-invent herself again when her sometime boyfriend inadvertently burns down the Sunrise Cantina. Suddenly out of her job as a waitress, she applies for the post of “guest liaison” at The Brant Hotel in a one-street town in western Massachusetts. What she discovers when she and her best friend/roommate Allison arrive in Mission is a picture-postcard-perfect building owned by an old-fashioned matron and staffed by rather stodgy but pleasant country folk. Her tasks will be light, Victoria Brant assures her, just filling out the regular crew to take care of the increased number of summer travelers.

Unfortunately for Claire, for Allison, and for nearly everyone else in The Summer Job, nothing and nobody in the hamlet is as it seems. In the dense forests surrounding Mission, a group of local young people—referred to by Brant slightingly as the “children”—have established a rustic camp of sorts, where they drink, smoke, have parties…and kill the occasional passersby. Not to be outdone by their competition, the older inhabitants of Mission have their own secret enclaves in the basement of the hotel, spearheaded by the imperturbable Ms Brant and presided over by the mysterious Father Hayley who, since being horribly burned in a fire that destroyed his church, has lived at The Brant Hotel free of charge.

As Claire discovers more and more about the workings inside and around the hotel, she finds herself caught up in an escalating war between the two factions, her situation made even more difficult as she becomes involved with an enigmatic—but definitely hunky—young man, Tobin, whom she thinks she might love but whom she doesn’t entirely trust.

When the war breaks out into gunfire, Claire faces choices both difficult and bloody.

The Summer Job is fast-paced horror in which the monsters wear human guises, behave like normal humans, and reveal themselves only at the last moment…as humans. There is a sense of pointlessness about the savagery that the two offshoots of an original Satanist cult show toward each other; yet at the same time, Cesare tells his story with more wit and humor that one might expect, alleviating the nearly overwhelming atmosphere of dread with casual comments, such as when Bert, a missing pet dog, is found in a refrigerator, dead, skinned, and prepared for cooking. Though nauseated by what she has discovered, while scooping the remains into a black garbage bag, Claire off-handedly refers to a “bag of Bert,” lightening the moment just enough to make her subsequent realization—that the chef  at The Brant must have already, perhaps frequently, served dog meat to the patrons…and to her—that much more devastating.

Light on deep philosophical insights, on intense or complex characterization, or even on details about the intricacies of cults, The Summer Job reads pretty much the way Victoria Brant describes the eponymous employment opportunity to Claire: a bit of work, a fair amount of  pleasure, and a chance to spend a some entertaining time exploring an intriguing (if ultimately deadly)  community.