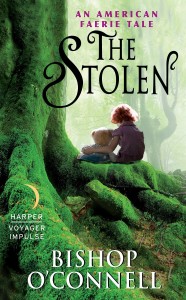 The Stolen by Bishop O’Connell begins when Caitlin’s little girl is kidnapped by evil fairies. Now she must accept help from a mysterious, troubled warrior and his elf friends or she may never see her child again. If this sounds like grounds for a fantasy novel, it is, only this one takes place in the here and now and therefore should be considered “urban fantasy”.

The story moves along at a brisk pace, oriented more toward action and adventure than much deep character development. Even though this tale takes place in Boston and not the Deep South in ways it brings to mind the TV series True Blood–minus the softcore porn, and substituting evil goth fairies for vampires; one of the warrior’s friends is even an elf that runs a nightclub. The whole thing is steeped in fairy lore and much of the resulting terminology adds to the fae flavor. Don’t worry though; even if you don’t know a word of Irish or Welsh, most terms and phrases can be taken in context and should not hinder smooth reading. Besides, there’s a handy glossary in the back for reference. Add a couple wizards, including one who turns out to be close friends with our heroine, more varieties of fae, and a demon or two and you have yourself a fun ride into the fantastic.

Not bad for a debut novel and judging by how it ends there may be more later. The Stolen is recommended to any fairy freak or urban fantasy fan wanting to spend a few pleasant hours.