The Squid Whores of the Fulton Fish Market – Book Review 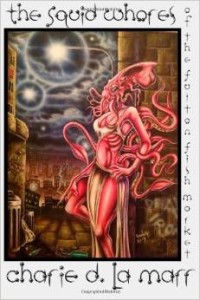 I’m no advocate of labeling fiction, seeing this—rightly—as an aspect of commerce. After all, there is only good writing and bad writing. Sometimes, though, labeling can help protect readers sadly lacking a fully formed sense of discretion.

Describing Charie D. La Marr’s The Squid Whores of the Fulton Fish Market isn’t difficult. I can tell you what it’s like, who might enjoy hanging out with it, but what good is that? The author herself has referred to the book as “NYzarro,” which rings truer than Bizarro because La Marr’s narrative—believe it or not—resonates more with Burroughs, Philip José Farmer, K.W. Jeter, and even Katherine Dunn of Geek Love fame, than with the Carlton Mellick III universe of Bizarro and its thorny branches.

La Marr’s relentless puns and wordplay detonate the prose as if blurted by Don Rickles, delirious after a shot of Lydia Lunch’s DNA:

“Why did you go to a dyslexic tattoo artist anyway?” Reddick asked.

“He was cheap. Oh crap! What am I gonna tell Pastor Astor when I get there this week? I’ll be the laughing stock of Our Lady of Perpetual Motion!”

“Hey look,” Reddick said. “We all got our problems. Just remember, I’ve got my eyes on you. Every move you make,every step you take, I’ll be watching you.”

La Marr’s cephalopodan protagonist, Circe, must ink out a living under the watch of hostile pimp, Cal Amari (a cigar-chomping octopus who is to NYzarro what Edward G. Robinson was to noirish gangster films), along with Shaniqua, Anemone, Laquimkwat, newly netted Angel and Star, and a few others. Not far behind is sarcastic Detective Willie Reddick—don’t make fun of his name, like under-the-gumshoe fish merchant Hal Schlemmer, who Reddick suspects of knowing the whereabouts of the squid whores and their pimp.

There are levels of fetishism here that will, let’s say, surprise many of you, and probably would garner two thumbs-up from the Marquis de Sade and Georges Bataille in whatever eternal realm holds them. Too, La Marr’s occasional social satire (well, one could fairly claim this of the entire work) sneaks up on the reader. I can easily see Squid Whores sharing space with Lucy Leitner’s Pittsburgh riot, Working Stiffs.

If you’re looking for fierce inventiveness, sexual anarchy, and a blackly comic vision, you’ll love it.

A taste for squid not required.