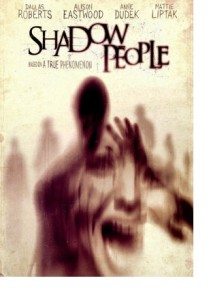 I have been interested and fascinated by the paranormal since I was young. The thought of the existence and presence of ghosts and other otherworldly entities is a scary and exciting thought. I confess, I am a believer. I can be a real skeptic at times but I do believe that there is, in fact, “something out there.”

One of the most interesting forms of the paranormal has always been what are referred to as the Shadow People. They are defined as malevolent spirits that have no features other than being in the shape of a person or just a black mass. It is said that they use the shadows to move while a person is frozen in their bed. This, my fellow horror lovers, is great material for a horror film.

Director Matthew Arnold, who is first timing it after a couple of horror shorts, has given us a new film, based on true events, that is interesting for a while and digs fairly well into its subject but falls way short on the creepiness factor while finally falling apart in the last half.

Fine character actor Dallas Roberts, recently seen last season on AMC’s The Walking Dead, plays a radio DJ in the eighties who is your stereotypical cynic who listens to his follower’s problems and theories on life and then berates them.  His ratings are low and a looming syndication deal is about to go away if the ratings do not go up.

One night he gets a call from someone claiming to be terrorized by the shadow people. The caller tries to kill himself on air. This leads to big ratings and the DJ’s interest in following the story which then leads him to encounters with the entities of the title. In doing so he discovers that it started in Cambodia years ago and continued through experiments by a crazed doctor trying to catch the evidence on tape.

Up to this point, the film is doing well in earning our interest. The scare factor has been relatively low but I was intrigued by the screenplay and stayed with it.

Director Arnold had so far steered clear of any directorial flashiness and it helped the film greatly, giving it an almost seedy detective story feel. Then, out of nowhere, he begins to use split screen interviews with the real people involved in the true story while the actors play out the described scenes. Mr. Arnold, you get a big demerit for using this awful technique! It was previously used in the atrocious sci-fi/horror suck fest, The Fourth Kind. It really takes you out of the film and gives it a cheap quality that you might see on a bad television true crime show with silly reenactments. It was a very bad choice by the director.

As far as the acting goes, Roberts is great in the lead role and shows a good range as he goes from asshole cynic to true believer over the course of the film. The same cannot be said of Allison Eastwood. As Robert’s reluctant partner in the investigation she is as wooden as an actor can be. Hal 9000, the computer from 2001: A Space Odyssey, was Groucho Marx compared to her stiff performance.

By the third act, the shadow people are almost an afterthought as there is too much time spent watching our lead character grow overly obsessed while losing everything around him that is important.

I imagined great use of shadowy rooms where the shadow people lurk and creep towards their victims. There are only two such sequences and they are handled in a very non scary and pedestrian way. We see the victims freeze up in bed and then a couple of quick flashes of the shadow people moving towards them and then…fade to black. We are also treated to 2 or 3 jump scares that we see coming and do nothing to enhance the lack of horror on the screen.

The film turns out to be more of a thriller than a horror film and teaches us nothing new about this fascinating paranormal subject.

The Shadow People is an interesting effort for a while but gives way to poor pacing, weak dialogue and sloppy directing. If you are seeking a good scare flick for this Halloween season…this is not it.