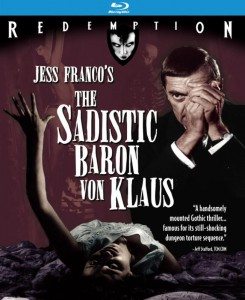 It seems as though Jess Franco’s films are popping up everywhere nowadays. Back in the day, his work had a cult-underground following, and the only way you could get his films was through bootlegs and copying. Now, several fine film companies have obtained the rights to his titles, and a resurgence of Franco’s popularity has appeared. Several of his titles have been released on Blu-ray, the most recent of note being The Sadistic Baron Von Klaus.

If you are not familiar with The Sadistic Baron Von Klaus, here is the plot synopsis courtesy of Kino Lorber:

In this follow-up to his ground-breaking horror film The Awful Dr. Orlof, Jess Franco (Female Vampire, A Virgin Among the Living Dead) continued to lay the foundation of a career defined by fetishistic imagery and transgressive violence. A series of grisly murders in the remote village of Holfen convinces the locals that the town is still cursed by the spirit of a 17th-century baron who maintained an elaborate torture chamber in the dungeon of his estate. Undaunted by the villagers’ superstitions, a detective (Georges Rollin) quickly focuses his investigation upon the creepy Max Von Klaus (Howard Vernon). Meanwhile, the youngest male descendent of the Von Klaux bloodline (Hugo Blanco) returns home to mourn the death of his mother, and must wrestle with his own connection to the cursed family history.

The Sadistic Baron Von Klaus is shot well and Franco once again showcases his masterful use of lighting to set tone and mood. However the HD transfer does not look very good. The picture is grainy in many scenes and there are even faint vertical lines that linger onscreen throughout the entirety of the movie. I was very surprised to see this as most of Kino Lorber’s restorations look excellent.

The sound quality is nice overall, however it is distracting in places because the voices don’t synch up with the dialogue for the most part. I recognize the fact this film is done in a foreign language, but it appears to be shot in one language and spoken in another…with English subtitles thrown in for good measure. I’m not sure if this was intentional or not, but I found it a bit distracting.

The story of The Sadistic Baron Von Klaus is a slow-burn thriller that builds up over time and results in a less-than-surprising climax. Granted, the film is 50+ years old so much of this can be overlooked, especially when taken in context; after all, this film is one of Franco’s early works where he was first honing his skills as a filmmaker. Still, I have to confess this film lacks a bit of the spark that Franco’s later works contain.

But there’s no doubt in my mind that The Sadistic Baron Von Klaus is a definitive piece of cinematic history and fans of his work will certainly want to snatch up this Blu-ray ASAP. As such, I’m recommending this one to anyone and everyone looking for a classic black-and-while film with a slight edge. Fans of Psycho will relish the haunting settings, while mystery-lovers might enjoy the ‘whodunnit’ aspect. The film is available now, so give it a look.