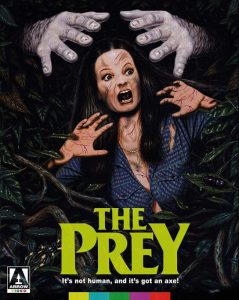 God, I love Arrow Video. Only they would bother to put so much work and love into a Blu-ray release of this mostly forgotten slasher from 1983, The Prey. Especially since it’s not all that good. Well, it’s not. It’s the typical tale of six young people hiking in the woods meeting a scarred-faced mute killer. Add to that the fact that none of the kills are exceptional, and that goes double for the characters, and then the cherry on the cake: the movie is padded to the gills with nature footage. Yes, long, needless scenes of snakes, birds, spiders, frogs, and various other forest critters. I can only assume this was done to bring up the run time to feature length, but all they do is stop the movie dead every time they pop up. So with all that said, why am I glad that Arrow Video put this movie out? Because who else would? But should you get this long-lost film for your home horror library? Well, keep reading.

As stated, some people go out into the deep woods for some fun, but these woods have a history. It seems that some years back there was a massive forest fire here and a camp of gypsies got caught in the blaze. Naturally at least one of the campers lived and is now a silent, stalking, death machine and as you could guess, the “kids” and the madman are soon to meet. Add to that a forest ranger with a love for telling bad jokes and a desire to save the campers once he becomes aware of the murderer. And really, that’s about it.

The Prey is one of the many also-rans that followed in the wake of Halloween‘s and Friday the 13th‘s successes, and as such it quickly got lost in the glut of slasher films that were flooding the theaters during the early 80s. But it is far from the worst of the knife-happy lot; it has a bit of charm and I always liked the look of the killer, and that means something in these kind of films.

On to the extras and goodies Arrow Video gave us for the new Blu-ray release of this very forgotten film. First, as always, there are the physical treats that only Arrow seems interested in doing anymore. There is the reversible cover art, a 27-page color collector’s booklet, and a neat little cardboard camping permit to the Keen Wilderness. I love silly stuff like that. Now let’s get to the extras on the disc, and first and foremost it must be said that there are two versions of The Prey on here, each on their own Blu-ray. There are the theatrical cut and the international cut, and it is awesome that you get both here. Then there is an interview with actress Debbie Thureson, another interview with actress Lori Lethin, and yet another interview with actress Gayle Gannes. But wait, we’re not done, because now actor Jackson Bostwick steps up for an interview followed by another one by actor Carel Struycken. There are two audio interviews as well, one with director Edwin Brown and one with producer Summer Brown. Then there is a featurette revisiting the original woods where the movie was shot, followed by the “Texas Frightmare Experience” that has an audience reaction audio track for the film and a Q&A with actors from the movie. There is an audio commentary by two podcasters that has nothing to do with the film, except being big fans of the movie. That was sort of a mixed bag, but since no one related with the movie wanted to do it, at least someone did. Last but not least there are some trailers. So yeah, much more love shown to The Prey than I would have thought.

As said, The Prey is not a great film, but I would say it is mandatory for all fans of hidden horror movies and collectors of all things slasher. As I am both of those, I do recommend this film and this amazing new Blu-ray version of it. If you do not fall into one of those two camps, perhaps approach this purchase with some caution.