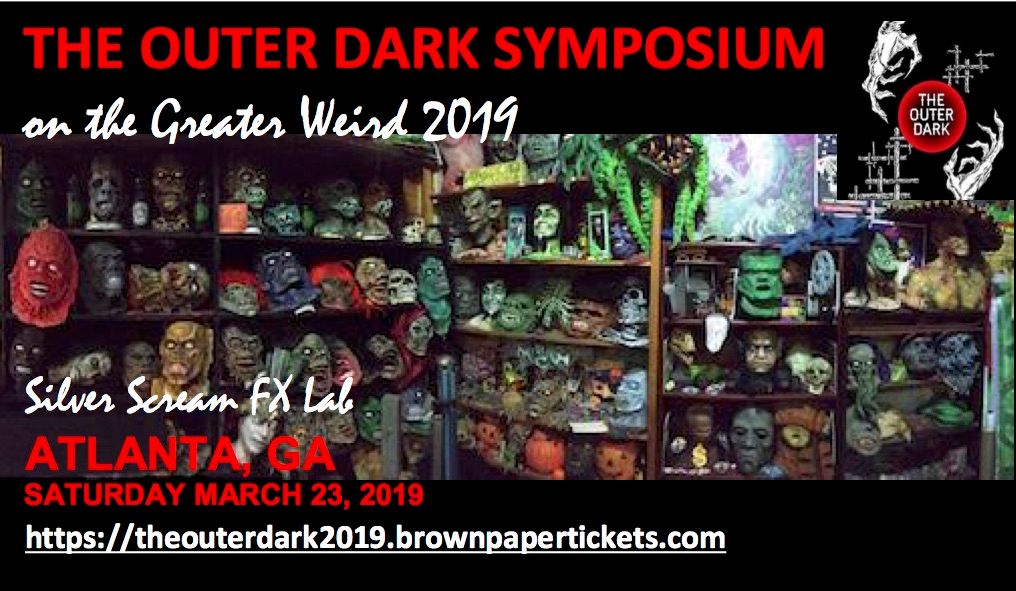 “We’re beyond excited to welcome our largest line-up yet, a who’s-who of some of the most dynamic authors, editors, artists, publishers, and scholars in Weird fiction today at a one-of-a-kind location,” says Scott Nicolay, host and executive producer of The Outer Dark podcast which airs on the British-based online platform This Is Horror. “As with The Outer Dark podcast, our goal is to foster conversation and community among a diverse slate of program participants–inclusive, safe and welcoming to women, LBGTQ+, and writers of color.”

“Returning to Atlanta where we launched the symposium in 2017 also allows us to involve BlacktastiCon organizers Milton Davis and Balogun Ojetade,” Nicolay adds. “And thanks to sponsor support from Innsmouth Free Press, we are delighted to bring in acclaimed Mexican author  Gabriela Damian Miravete.

“While it might seem hard to top our 2018 location at the Winchester Mystery House, one of the most haunted places in America, we’re confident we’ve done that with Silver Scream FX Lab,” says The Outer Dark Producer Anya Martin. “It’s a floor-to-ceiling funhouse featuring both a special effects make-up/props/costume studio and an extensive museum including your favorite classic Universal and Toho monsters!”

At Silver Scream, Shane Morton and his team have designed and created most recently the Cheddar Goblin for the crazed Nicholas Cage cult hit Mandy (2018), as well as work for AdultSwim’s Your Pretty Face is Going to Hell, Too Many Cooks, and many more. Morton will lead an exclusive behind-the-scenes tour of the facility and museum and treat attendees to a one-of-a-kind live performance emceed by Professor Morte, The Ghost Host with the Most of Atlanta’s popular Silver Scream Spook Show.

Symposium programming will be recorded and featured on The Outer Dark podcast which airs on This Is Horror, reaching a global audience of listeners who are readers of Weird and speculative fiction.

Memberships/tickets are $100 if purchased before Feb. 28. The price rises to  $125 between March 1-20, if the membership limit has not been met. No tickets will be sold at the door.

An Indiegogo campaign to raise additional funds to fully support the symposium, will launch in mid-February. More sponsors will be announced soon, and sponsorship opportunities are available.

For more information or to purchase memberships to The Outer Dark Symposium 2019, visit https://theouterdark2019.brownpapertickets.com/.