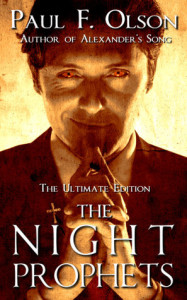 The Night Prophets: The Ultimate Edition

The 1980s embraced the vampire. Building on Stephen King’s revitalization of the trope in ’Salem’s Lot (1974), writers reimagined the vampire in a multiplicity of ways. Among the more notable contributions to the sub-genre, one finds some most intriguing twists and turns, in part exemplified by the following:

Each of these, in its own way, transformed tradition and, especially in the case of Rice and Lumley, initiated entire sequences of explorations into things vampiric.

In 1989, just at the end of this efflorescence, Paul F. Olson published his first novel, Night Prophets. It stands out from many of the other vampire tales for a simple reason: it chose not to expand the traditions by concentrating on individual characteristics, such as the possibilities of psychic vampires; the inherent connections between vampires and the over-the-top, self-destructive elements of Rock; the equally inherent connections between vampires and sexuality in multiple forms; or vampirism as an inversion and simultaneous echo of parents’ failure to meet their responsibilities to their children.

Instead, Olson followed strict, conventional lines that led from Bram Stoker’s Dracula directly  to King’s ’Salem’s Lot and focused instead upon the gradual revelation of evil and the unDead within a relatively closed society. King had selected a small town, isolated, in which townspeople shared few deep connections and the vampire’s depredations could go almost unnoticed…for a while, at least. Then the story turned explore to how a handful of believers might overcome something as powerful as a King Vampire.

Olson goes a step farther in isolating his victims. When the central character, Curt Potter, arrives at the main compound of the Universal Ministries just outside of Chicago, he finds himself in a completely self-sufficient religious community with a strict hierarchy in which all of the faithful know their places and few, it seems, dare question authority. There is no outside interference.

Potter has entered the compound on his own private search for truth and justice, one that has no overt connection to religion; and though he is impressed with the physical structures and the dedication of individuals, he remains an outsider. As such, he begins to notice small things that insiders do not…young people behaving almost as if they were zombies; a strange affliction that besets a  young man worshipping in an outdoor amphitheater; the inexplicable lack of mirrors anywhere on the campus. Only he can put the clues together and arrive at the inevitable, though impossible, conclusion: the leadership of Universal Ministries are vampires.

It then remains for Potter to collect a small nucleus of believers and, armed with traditional weapons against the undead, set out to destroy the King.

The 1980s was also a period of long novels; and in its original form, Night Prophets was long…too long for its publishers. Olson agreed to edit the manuscript to a more marketable length, in the process deleting or restructuring chapters and altering characters and their fates. It became shorter, more streamlined, more action-oriented.

And there is remained for almost a quarter of a century.

Now the novel has re-emerged, this time as an eBook rather than a print book and in its original form. In his detailed introduction to The Night Prophets, “Taking Communion with the Night Prophets,” Olson explains why he decided to restore the novel and discusses a number of intriguing points relating to it.

But the key is that the novel itself is now as he intended it.

As such, it becomes almost a retrospective on the 1980s. Olson has not updated it significantly (as King did in his unexpurgated edition of The Stand); references to society and culture are as they were then, which gives The Night Prophets a unique piquancy as we re-visit (for the first time, as it were) a familiar landscape and discover new things about it. It remains what it set out to be, a product of its milieu and at the same time a classic vampire tale, drawing upon traditions that now may seem outworn or naïve or jaded but that, in Olson’s hands, are themselves quickened and given life…true life, not the pseudo-life of the vampires.

The basic story is not changed: a young man’s search for identity and stability. The overriding evil remains the same: a true High Church, hidden within the Universal Ministries, that has as its purpose to achieve the twin goals of all vampires and vampire-wannabes: Power and Immortality. The writing remains the same: clear, direct, at times lyrical and powerful.

And most of all, the ultimate conflict has not changed: Evil versus Good. Many if not most vampire novels credit the unDead with almost insurmountable powers. Their abilities far transcend those of mere mortals; it is often a surprise when the mortals actually win. More often, there remains the unsettling possibility that the unDead are not defeated but have merely withdrawn.

What makes this trait so unsettling—and what has become almost a staple in vampire novels over the last four decades or so—is that there is usually no equivalent opposition. At their core, vampires are anti-Gods. Not Antichrists, as in The Antichrist; rather, they represent an opposition to a God-like character. Although they have risen from the dead, they are not resurrected beings; they are the unDead. Although immortal, their immortality is constantly endangered by the Light—literally and spiritually. They feed on blood rather than shed their own blood for humanity. They prey on innocents, including children, rather than nurturing and harboring them. They are creatures of the night, rather than the day. They depend upon deceit and subversion rather than faith and conversion.

And, in most vampire novels, they have no true antitheses, no equal but opposite forces to counteract their consummate evil.

The Night Prophets reverses that trend. There is a power present that urges toward the destruction of the vampires. It is not named “God”; it has not physical presence in the novel per se. But character know that they have been led, that it is their task—almost their calling—to destroy the evil and, at the darkest moments, they call on that power and it responds.

All in all, The Night Prophets satisfies. It recalls a different time and subtly blends it into our own, not by references to cultural icons and name-brand commodities but by reminding readers of a time when Evil was forced to face Good…and Good triumphed.

A fun, layered read. Good to have the original on my Kindle.