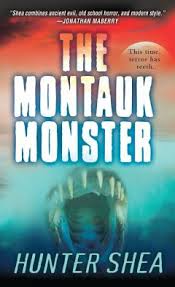 Hunter Shea’s latest opus sends mixed messages. It starts off like a Peter Benchley novel, drifts off into a hybrid of a Dan Brown conspiracy and a Robin Cook medical thriller, by way of a Loren Coleman cryptozoology report before settling down into an old fashioned “who’s stalking who” novel with copious amounts of blood and violence.

A small Long Island town is plagued by reports of bloodthirsty (and apparently contagious) creatures that do not seem to be of a recognizable species. The local cops are baffled, but there are those who think it may have something to do with a nearby island with a top secret military lab.

It’s an entertaining read, but there are problems. Aside from a completely unbelievable moment when the military sends in a highly trained special ops team who immediately panic and disobey orders, almost all the issues come from weak editing. A stronger editorial presence would not have allowed text that could be improved with minor changes. These issues include jarring transitions between scenes with different characters, causing readers to have to pause and remember who was doing what where; and scattered odd descriptions that sound more like a pulp era detective novel than a contemporary thriller. It detracts from Shea’s solid pacing and narrative skills, and Shea’s story telling is able to rise above these shortcomings inflicted on the publisher side of the equation.

The Montauk Monster is a fun summer read for the horror fan. It’s gory enough to appeal, but should be considered a guilty pleasure of the season, like riding a moped in white socks and sandals— it’s fun, but not something you really want to be caught doing by friends. Just don’t start reading it on the beach. You may find yourself drawn into a plot that’s a little too close for comfort as the tide rolls in.