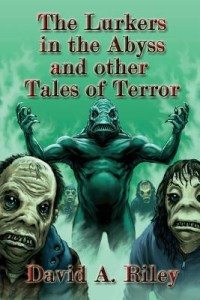 The Lurkers in the Abyss and Other Tales of Terror

There is a downside to the recent expansion of small press publishers and that is the fact that it has become far too easy to miss things.  Even with an eye on all of the horror websites, it’s likely that something is going to slip your grasp.  That’s what David A. Riley and THE LURKERS IN THE ABYSS AND OTHER TALES OF TERROR did with me!

I’ve been reading horror literature for over 35 years now and I like to think I have a pretty good handle on the field.  Then something like this comes along and you wonder, “how did I miss this?”

Riley has been writing for some time.  His first published story, the titular “The Lurkers in the Abyss” was included in the 1969 book, THE ELEVENTH BOOK OF HORROR STORIES.  The story went on to be included in THE CENTURY’S BEST HORROR FICTION published in 2012.  Riley has written many other short stories since 1969 and been published in a wide variety of places and yet I don’t recall ever coming across his work before.

Which is a shame because these stories have a powerful insidiousness that eats away at the back of your mind and reappear when you least expect it.  Their ideas and utter maliciousness gnaw at you to the point where you begin to question the dark shapes in your bedroom or the creaking sounds in the hallway outside your door.

The universe that Riley presents is not a forgiving one.  Like Lovecraft, Riley’s early influence, his universe does not care about you nor is it concerned with whether you are a ‘good’ or ‘bad’ person or even what could be considered ‘fair’ in life.  Many of the main characters in Riley’s fiction are people who are simply going about their regular lives until something happens and suddenly they have been marked by darkness.

In the title story, the ‘hero’ is simply someone who is trying to escape a band of rough thugs and get home safely when he stumbles across something far, far worse.  In “After Nightfall”, a Lovecraftian type researcher learns that it is better to not question some customs.  Simply the act of a car breaking down in a snowstorm can be enough to bring about “Terror on the Moor” while the house of an evil man can live on even after it’s been demolished and turned into apartment blocks as in “Prickly”.  Even science fiction is not immune as Riley shows there is horror even here in “Winter on Aubarch 6” and “Help-Plants”.  Perhaps the most insidious of these stories is “Soft Little Fingers” where a man becomes cursed simply because he looked at a window of a car at the wrong moment.  And there are ten more tales like this in the collection; enough to make you want to sit in a bright, lighted place for a very, very long time.

In the introduction, David A. Sutton characterizes Riley’s stories as “urban horror” and there is plenty of that here but there is also something more.  Something that, like the work of Ramsey Campbell, is out of synch with the rest of reality.  Even more, with Riley’s fiction, you are left with the feeling that you yourself, at any time, doing the most mundane acts, could be consumed by darkness.

And what more can you ask of a horror writer?