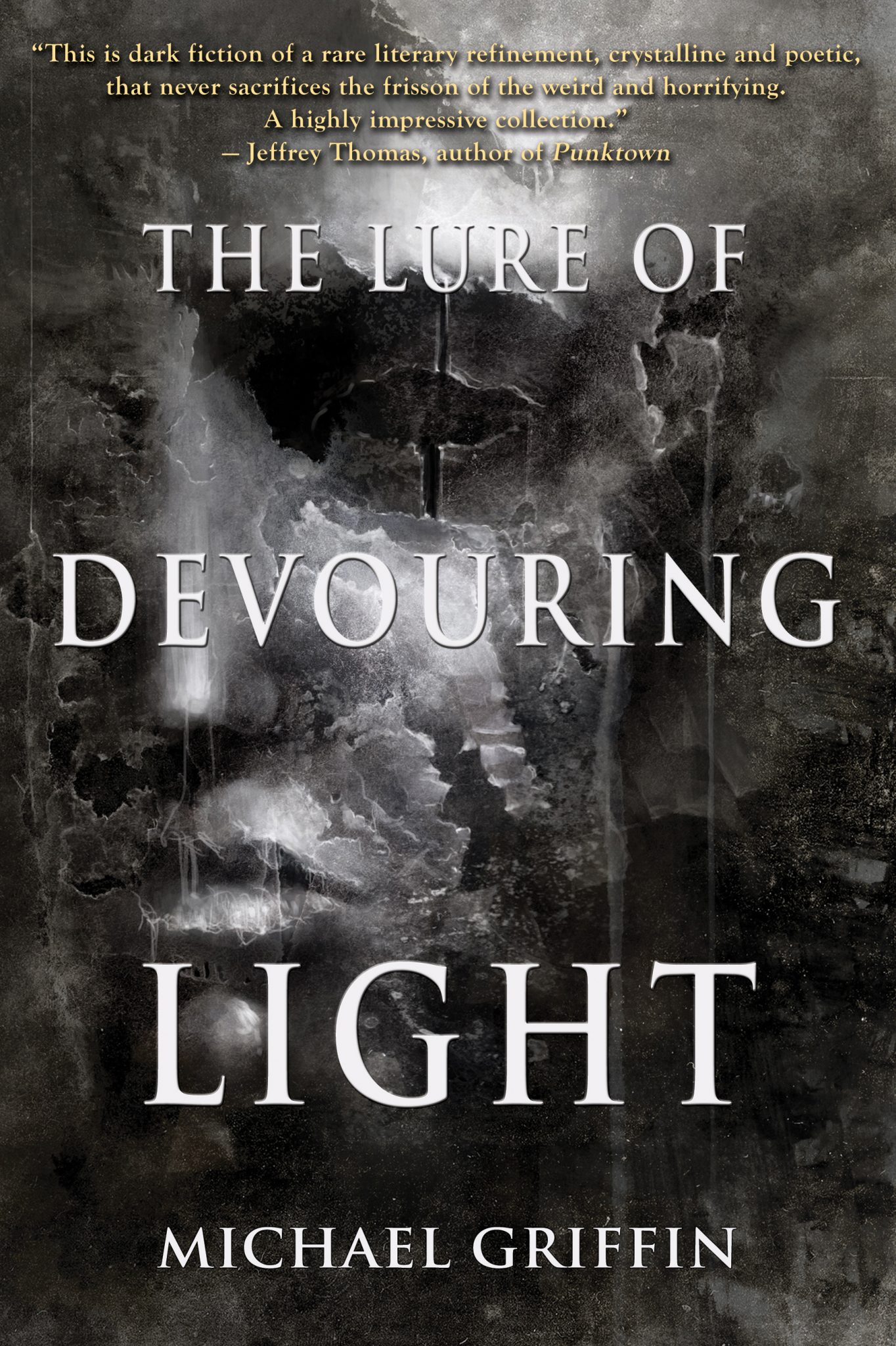 This is the first collection from Michael Griffin, an author of weird fiction and horror that connoisseurs of those types of tales should already know and love. Mr. Griffin is an author’s author, and by that I mean any writer I know of admires both the man and his work. As I count myself among that number, this is an easy recommendation for me. The fact that I already knew most of the stories in here (and respect the hell out of publisher Word Horde) made that all the easier. And if you are a reader of his work, then I’m guessing you are also a fan, so you already either have this new book or it’s on your to-buy list. But should you not know of Michael Griffin and his stories, or perhaps you’re new to it and want to get a nice tasty chunk of it all at once, then let me tell you about The Lure of Devouring Light because this is one you’re going to want to get.

Griffin smiths words with plenty of style and atmosphere. Mood is his anvil and creeping dread his hammer, and with the two he makes chillingly beautiful art. He doesn’t have to shout — his stories could be classified as quiet horror, if that simple definition didn’t fail to do them justice. He has a wonderful imagination, and he trusts his readers to have one too, because he often chooses suggestion over being blatant. It is nice when an author has some faith that the read will “get it,” even when the story is so very…well, weird.

I liked each and every story in this collection, which is a very rare and praise-worthy thing. Even longtime favorite authors of mine, who shaped and molded my tastes from adolescence to now, don’t have a perfect record with me. So the fact that Michael could bat a thousand with me speaks volumes right from the start. There were some stories that connected with me on a personal level more than others, so instead of brief synopsis of all eleven tales in this tome, I’m going to shine a light on the top three that hit closest to my heart.

“Far from the Streets” is about a couple from the city looking to get back to basics, so they get a cabin in the woods and try to live off the grid for a while to get back to nature. But nature isn’t all that it seems. Enter some time manipulation (which I always love) and some body horror, and you have one cracking good tale.

“The Black Vein Runs Deep” is the longest story in the book. It has Griffin’s trademark measured, quiet style, but that is not to be confused with slow or boring. It gives the reader plenty of time to get to know and care about the characters in this tale of when good gold mines go bad. As the two friends continue to explore and descend the mine, their feelings for each other, and the feelings of fear, deepen.

“Diamond Dust” takes the weird out of the rural and puts it in the most hellish and horrifying location ever: the workplace. I could relate to this story far too closely than I liked, and that made it all the more effective.

The Lure of the Devouring Light is a great introduction to the writing of Michael Griffin. If you are someone that has yet to read anything by the man, get this book if you love well done, effective horror and weird fiction. I’m almost jealous of you first timers, because you’re in for a treat. If you have read Mr. Griffin before, then you already know how good he is. Either way, do yourself a favor and get this one fast. It doesn’t get more recommended than this.